New research shows women to be angrier drivers than men 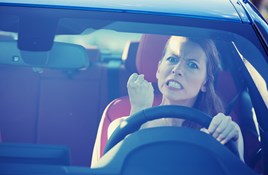 A study of 1,000 UK drivers has revealed women are, on average, 12% angrier than men when they’re behind the wheel.

The research was commissioned by Hyundai and found that driving sparked ancient defence instincts from when humans were hunter-gatherers.

These evolutionary traits kicked in during the test when women were either undertaken, shouted or beeped at, had to deal with a back-seat driver or were faced with a road user who failed to indicate. In all test scenarios, women were more likely to respond with anger than male drivers.

The study found there are two dominant emotions: happiness – intrinsically linked to a sense of freedom when driving, and anger when drivers feel out of control.

When the researchers looked at what makes us happy behind the wheel, 84% of people said 'empty roads', 78% said 'the countryside' and 69% 'the seaside'.

“Psychologically, women score higher than men on emotional and verbal intelligence, and on the personality trait of neuroticism.  Evolutionary theory suggests our early female ancestors had to develop an acute sense of danger for anything that threatened them and their young if their cave was undefended while men were out hunting. That ‘early warning system’ instinct is still relevant today, and women drivers tend to be more sensitive to negative stimuli, so get angry and frustrated quicker,” said Fagan.

Tony Whitehorn, Hyundai UK president and ceo comments:  “We are constantly striving to better understand what impacts people’s behaviour when they are driving and this research has certainly revealed some interesting, and somewhat surprising results.  By examining drivers’ emotions our aim is to help them get a better drive both today and in the future.”