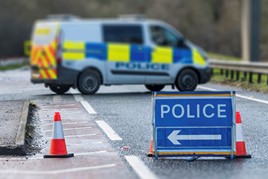 Almost 1,800 people died on the UK’s roads last year according to figures released today by the Department for Transport - similar to the level seen since 2012.

This overall casualty figure is 6% lower than in 2018 and is the lowest level on record.

Last week, the Government launched its Road Safety Plan which includes a number of new measures, including ‘alcolocks’, which are being considered to reduce the number of people killed and injured on the UK’s roads.

Charlie Norman, director of Drivetech, part of the AA, said: “Things have just not fundamentally improved in road deaths or serious injuries on our roads in the past seven or eight years.

“Wi the new Prime Minister making the bold commitment to increase police numbers by 20,000 in his inaugural speech on taking office, and the publication in the last week of the Government’s two-year Road Safety Plan and a separate review of Roads Policing announced, DriveTech, as a leading driver risk management and driver training organisation focused on road safety, is optimistic that the focus will return to help drive down these unpalatable figures.

“We hope Grant Shapps, the newly appointed Transport Secretary, can also make sure this issue is clearly identified on his agenda for change.

“We continue to make our contribution by training business drivers to be better and safer, and supporting the police across the country with the delivery of driver offender retraining courses.”

While the nationwide number of road deaths remained static, Transport for London says the number of people killed on London’s roads fell to the lowest level on record in 2018, to 111 fatalities.

However, the people who suffered serious injuries rose 5% to 3,954, bringing the total number of casualties to 4,065.

The data has been released during London’s Vision Zero week, as the Mayor and TfL mark a year since they launched a bold Vision Zero Action Plan to eliminate all deaths and serious injuries from the Capital’s streets by 2041.

During 2018, people walking, cycling and riding motorcycles made up around 80% of all people killed on London’s roads, with 90 deaths.

The number of people killed while walking fell from 73 to 56, but still makes up a 50% of all deaths.

Twelve people were killed while cycling in 2018, with a further 770 suffering serious injuries.

Stuart Reid, director of Vision Zero at TfL, said: “2018 saw the lowest number of deaths on record, but we cannot rest on our laurels.

“It is not acceptable for even one person to die or to be seriously injured on our roads and we are working tirelessly with our partners to reach our Vision Zero target.

“We’re calling on everyone across London to take care while travelling and look out for each other, as safe behaviours can save countless lives and prevent families, friends and entire communities of people from experiencing this unnecessary suffering.”

The Road Safety Plan is targeting road users of all ages, from company car and van drivers and private motorists, to older drivers, young adults and children.

The strategy has been welcomed by many motoring organisations, including the Society of Motor Manufacturers and Traders, says Nigel Base, SMMT commercial vehicle manager.

He added: “SMMT works closely with government on all aspects of road safety, including through my role on the Commercial Vehicle Compliance Forum.”

For more on protecting vulnerable road users, click here to read a Commercial Fleet feature on the subject.

It’s no good just paying lip service to the concept of ensuring the wellbeing of your staff. Policies must be real and credible, says DfBB’s Simon Turner