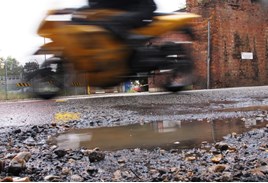 The Chancellor’s additional £2.5 billion pothole pledge will not be enough to plug the gap in local road maintenance budgets, let alone the rising backlog of repairs.

It shows that the green shoots of improving conditions reported in 2019 have not been sustained, with local authorities having to cope with an average drop in overall highway maintenance budgets of 16%.

And, with overall local authority spending down, highway teams have been allocated a smaller slice of a smaller cake to maintain the road surface and structure, which has led to a widening funding gap in the amount needed to maintain the carriageway to target conditions.

ALARM 2020 reports that this shortfall is now an average of £4.9 million (£5.4m in England) for local authorities across England, London and Wales, up from £3.9m last year.

Less funding for the carriageway inevitably means less maintenance, and this is borne out by ALARM 2020’s reported reduction in pothole repairs, downward target adjustments and declining structural road conditions.

And, in the middle, there is a continued increase in the number classed as ‘adequate’, with between five-15 years’ life remaining, suggesting an ongoing slide towards mediocrity.

Rick Green, chair of the AIA, said: “Highway maintenance budgets have dropped back to where they were two years ago.

“Over the past 25 years we have repeatedly seen this pattern of short-term cash injections to stem accelerating decline, only to be followed by further years of underfunding.

“This stop-start approach has been wasteful and does nothing to improve the condition of local road network on which we all rely. In fact, it has just contributed to a rising bill to put things right.”

He continued: “The £2.5bn extra funding over the next five years announced in the Budget will certainly be welcomed by hard-pressed local authority highway teams dealing with increasing demands on smaller budgets, as well as the effects of extreme weather events, such as the recent storms, on an ageing network.

“However, £500m extra a year divided across English local authorities is a long way off the one-time catch-up cost of £11.14bn that ALARM 2020 indicates is needed to bring our local roads across England, London and Wales up to a level from which they can be maintained cost effectively going forward.

“What’s needed is additional and sustained investment to help underpin the Government’s levelling-up strategy and social cohesion goals, as well as complement its ambitions for more sustainable modes of transport.

“Twenty-five years on and we are dealing with new and unprecedented challenges and understandably resources will need to be prioritised accordingly in the short-term. Looking ahead, however, a sustainably-funded, well-maintained local road network will be key to supporting recovery and regrowth.”

Previous surveys of more than 7,000 IAM RoadSmart members showed a clear majority (88%) thought the condition of our roads had deteriorated and over half those surveyed (56%) said they had to take avoiding action on every journey to dodge potholes.

Nearly half (over 3,400 respondents) said they had experienced damage to their vehicle as a result of hitting a pothole. Some 27% said they needed to steer around a pothole every day.

The UK’s largest road safety charity recently welcomed the £2.5bn shot-in-the-arm for filling the huge backlog of potholes - but warned at the time of the Budget announcement by the Chancellor, Rishi Sunak, in March this year that a long-term plan is urgently needed to cure the problem for good.

Neil Greig, IAM RoadSmart director of policy and research, said: “Pothole damage is not just inconvenient and expensive, it is a massive safety concern.

“Now is not the time to divert essential local authority resources away from the number one priority of keeping communities safe and cared for during the Coronavirus lockdown.

“However, drivers and riders pay a premium through their taxes for investment in roads and any long-term diversion of funds will cost more in the long run.

“Local authorities must consider now the resources that will be needed to restore the UK’s roads, so that when traffic volumes return to their normal levels, the road network  can play its part in getting the economy moving again.”

Fleet Poll
How would you like to see roads policing improved?
Vote
View all
101