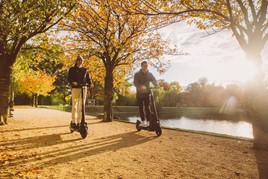 E-scooter riders should follow similar rules to other motorised vehicle users if they are permitted for use on UK roads, according to a new survey.

Age restrictions and a licencing system for riders were favoured by around two-thirds of respondents, along with a ban on e-scooter use on pavements and pedestrianised areas.

When questioned on safety, participants were most concerned about pedestrian safety (79%), followed closely by the safety of other road users (74%) and the safety of e-scooter riders (64%).

Young people (aged 18-24), were significantly less likely to be concerned about the safety threats posed by legalising e-scooters on all roads in the UK, with 59% of those aged 18-24 stating concern about pedestrian safety compared to 90% of over 55’s.

The new figures suggest that if the legal status of private e-scooters were to change for public roads, there would be significant concerns about how they should be regulated in order to keep all road users and pedestrians safe.

Law firm Keoghs commissioned the study and is now calling on the Government to deliver a clear plan for the prospective legalisation of e-scooters, to provide clarity and to protect members of the general public.

Natalie Larnder, head of market affairs at Keoghs, said: “As the number of e-scooters on our roads increases, we urgently need the Government to properly address the laws around how they can be used safely. It’s clear that road users are concerned about safety and want an end to the ‘wild west’ created by the lack of proper regulation or clarity on how and where e-scooters can be used.

“Failure to address these points is leaving the public understandably concerned about the risk of e-scooters to pedestrians, other road users or to e-scooter riders themselves.”

E-cargo bikes are increasingly coming on to the radar of organisations and many are looking at how micromobility solutions, which also include e-bikes and e-scooters, may be incorporated into their fleet operations in built-up areas.

A fleet of Dott e-scooters have been used to identify road safety risks in cities.