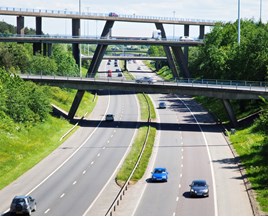 The number of substandard road bridges managed by councils across Great Britain has risen for the second year running, according to analysis by the RAC Foundation.

The rise comes as council engineering experts warn about a shortage of staff to carry out inspections to ensure the bridge stock remains safe and fit for use.

Local authorities in England, Scotland and Wales identified 3,211 bridges – defined by highway engineers as structures over 1.5m in span – as being substandard at the end of 2021.

A substandard bridge means one unable to carry the heaviest vehicles now seen on our roads, including lorries of up to 44 tonnes.

Steve Gooding, director of the RAC Foundation, said: “Bridges, as defined by highway engineers, come in all shapes and sizes, from soaring structures that span rivers and cross estuaries, through the many modest bridges designed centuries ago for the horse and cart, right down to those that are little more than culverts carrying water under a carriageway.

“But even the failure of the shortest of these structures could mean a five-foot long gap in the carriageway, and even on relatively minor roads that can still be a headache, causing disruption and possibly a long diversion.”

Many of the substandard bridges are subject to weight restrictions. Others will be under programmes of increased monitoring or even managed decline.

The analysis was carried out by the RAC Foundation which submitted FOI requests to 206 local highways authorities in November 2021.

The analysis is based on data provided by 196 councils (four fewer than the previous year) out of the 206 asked.

Between them the 196 councils are responsible for maintaining 70,944 bridges meaning 4.5% of the inventory disclosed is substandard.

Five bridges including relatively short structures with a span of at least 1.5 metres had fully collapsed in the previous twelve months. A further 37 had partially collapsed.

Between them, councils say they would ideally want to bring 2,374 (74%) of the 3,105 substandard bridges back up to full carrying capacity.

However, budget limitations mean they anticipate that only 379 of these will have the necessary work carried out on them within the next five years.

The estimated cost to bring all the substandard bridges back up to perfect condition is £1.16 billion (up slightly on the £992 million figure of a year earlier).

The study reveals that the one-time cost to clear the full maintenance backlog on all 70,944 bridges would be £5.44bn.

Gooding said: “What the data suggests is that councils have been fighting to hold their ground over the last five years.

“Whilst the increase in substandard bridges year-on-year is not huge the picture over the last five years looks more like flatlining than sustained improvement, and with the threat of more severe weather events linked to climate change that must be a worry for the overall resilience of our highway network.”

The survey of local highways authorities was carried out by the RAC Foundation with the help of the National Bridges Group of ADEPT (the Association of Directors of Environment, Economics, Planning and Transportation).

Kevin Dentith, chair of the ADEPT National Bridges Group, said: “Bridges are an integral part of the highway network but most go unnoticed as they carry us safely over obstacles.

“To manage these assets, many of which are centuries old, requires competent bridge inspectors and engineers to carry out regular assessments and maintenance to ensure they remain fit for purpose.

“The shortage of experienced and qualified people to undertake these crucial duties is putting a huge strain on the bridges fraternity who are struggling to recruit and often have to resort to ‘growing their own’ through apprentice schemes which are excellent but clearly requires a great deal of time, commitment and training before the staff are proficient to carry out the tasks required.

“The incidence of bridge collapses that lead to personal injury and traffic disruption is thankfully low but, unless more engineers and technicians are encouraged to join the industry and highway authorities receive appropriate funding from the Department for Transport, we are at risk of seeing a higher number of bridge collapses than those identified in this year’s RAC Foundation survey.”

The one-off cost of clearing the total maintenance backlog for the near 72,000 council-managed road bridges in Great Britain has increased by a third, according to the RAC Foundation.