Next two years to see a series of launches from BMW: Company Car In Action 2018 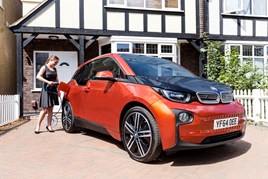 The next two years will see a series of launches from BMW – and by 2025 it will have 25 all-electric and hybrid cars on offer, national corporate sales manager Brian Cox told Fleet News at Company Car In Action 2018.

What have been the most popular models on your stand this year?

Every model has been popular. We have seen the current X5 out a lot even with the new one on static display. We have also seen a lot of interest in our plug-in hybrid and electric vehicles because people don’t always have the opportunity to test drive them.

What are BMW’s priorities in fleet this year and why?

Our priorities this year are to grow our segment share of the premium sector.

Over the next 24 months, we have a plethora of new models, including new 3 Series and X5. We also have more plug-in hybrids and by 2025 we will have 25 electrified vehicles, 12 of which will be pure EV. We have the product portfolio to substantiate that sector growth.

What are your fleet sales expectations this year and longer term?

We are having a lot more conversations about electric.

But, with WLTP, we have seen people hold off while manufacturers come forward with their figures, which is a frustration because we have our figures out.

There is a lot of talk about two-year replacement cycles as a temporary reaction to the lack of information on future BIK levels.

We are also seeing fleets change their company car policies, moving from 110-120g/km policies to 140g/km-plus because of WLTP.

The cars on the choice list are no more polluting , it’s just the different figures under the new test regime.

We expect things to settle down after September/October; a number of fleets have said they have put their orders on hold until then, when all the manufacturers will have their figures.

Diesel is a fuel of the future, says BMW corporate sales boss

Diesel has received backing from the boss of BMW’s corporate sales division, labelling it as a fuel of the future.

BMW has revealed the first images of its new BMW X7 large SUV, as the new model begins pre-production at the manufacturers Spartanburg plant, USA.