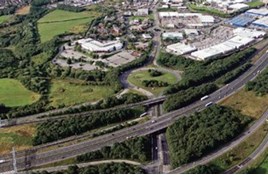 Key ‘A’ roads across the country could each benefit from up to £100 million in funding as the Government releases a consultation on the Major Road Network (MRN).

The MRN consultation proposes that 5,000 miles of ‘A’ road – more than 20 times the length of the UK’s longest motorway - are brought into scope for new funding from the National Roads Fund for upgrades and improvements.

Upgrade schemes which could be considered are bypasses, missing links between existing routes, road widening, major junction improvements and the use of technological and safety enhancements along stretches of the network.

Under the proposals in the consultation, each successful bid will be eligible for up to £100 million of government funding under the proposals and will help cut congestion, unlock housing and boost economic growth.

Transport Secretary Chris Grayling said: "For decades, these major local roads have been underfunded and not properly maintained.

"We are spending record amounts on improving our roads and we want more of our busiest roads to benefit from guaranteed investment.

"This will unlock no end of benefits for communities by improving motorists' journeys, taking traffic away from built up areas, as well as enabling new housing to be built and creating jobs."

The consultation on the A roads which will make up the MRN and the level of funding per scheme will close in 10 weeks.

It is planned that a review of the MRN will mirror the planned investment in the strategic road network - motorways and large A roads managed by Highways England. This means improvements on both networks will deliver more benefits for users.

Under the proposals, road upgrades will be developed by councils and, where possible, sub-national transport bodies - a regional body which influences funding decisions such as Transport for the North - meaning they will be designed by the areas to deliver the best solutions for their roads.

From 2020 the National Roads Fund will be paid for by Vehicle Excise Duty, which raised about £6 billion last year.

The Road Haulage Association (RHA) welcomed the announcement. “The prospect of investment in the transport network to improve the flow of the goods and services we all rely on is good news,” said RHA chief executive Richard Burnett.

“Whilst major roads have often benefitted from investment, ‘A’ roads and local roads have been under-invested in for many years.

“This announcement is a positive step. The devil is in the detail and the RHA stands ready to assist government in ensuring that funding is granted to the improvements that are needed the most.”

The Freight Transport Association (FTA) similarly welcomed the additional investment, but called for a guarantee that every scheme funded under the new MRN programme will support the needs of freight logistics.

FTA’s head of UK policy, Christopher Snelling, said: “Any investment in our road network is good news, especially given the lack of funding available over recent years for councils to improve just these kinds of roads. But the Government must ensure that any projects funded by this scheme are designed for freight as well as car users.

“Above all, FTA believes any roads classed as part of the MRN must focus on making motor traffic more efficient and be open to all types of motor vehicle without restriction. There should be no HGV restrictions on anything that wants to claim to be a major road.”

The Freight Transport Association is the UK’s largest and most influential membership association in the freight and logistics sector, with more than 16,000 members operating over 220,000 goods vehicles – half the UK’s fleet. Established in 1889, FTA’s members move goods by road, rail, sea and air, consign over 90% of the UK freight moved by rail and 70% of the nation’s sea and air freight.

IAM RoadSmart backs a campaign by the Road Safety Foundation for the Government to inject £220 million in improving high risk ‘A’ roads across the country.