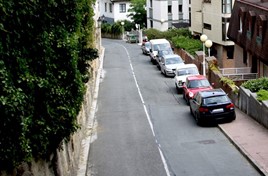 The Government has launched a consultation to decide how it will stop vehicles from blocking pavements.

It outlines three options: improving the traffic regulation order process to make it easier for councils to prohibit pavement parking in their areas, giving councils powers to fine drivers who park on paths, and a London-style nationwide ban on pavement parking.

Transport Secretary Grant Shapps announced the plans in March. The proposals are designed to improve the lives of people with mobility or sight impairments, as well as parents with prams who may be forced into the road to get around parked cars.

Shapps said: “Parking on pavements means wheelchair users, visually impaired people and parents with push chairs can be forced into the road, which is not only dangerous, but discourages people from making journeys.

“A key part of our green, post-Covid recovery will be encouraging more people to choose active travel, such as walking, so it is vital that we make the nation’s pavements accessible for everyone.”

Recent research from the charity Guide Dogs shows that 32% of people with vision impairments and 48% of wheelchair users were less willing to go out on their own because of pavement parking, decreasing independence and contributing towards isolation.

In 2019 the Department for Transport concluded a review which looked at the problems caused by pavement parking, the effectiveness of legislation, and the case for reform.

It found that pavement parking was problematic for 95% of respondents who are visually impaired and 98% of wheelchair users.

The Transport Select Committee also recently conducted an inquiry into the issue, with the commitment to consult on proposals forming a key part of the Government’s response to its findings.

RAC head of roads policy Nicholas Lyes said: “Blocking pavements impacts most on those with disabilities and those pushing buggies and creates unnecessary danger for pedestrians. In short, nobody should be forced into stepping into the road to get around a vehicle that has taken up pavement space, so the Government is right to explore giving local authorities additional powers to enforce this types of selfish parking.

“However, outlawing pavement parking as a whole is more complex because not all streets in the UK are the same. For example, some drivers will put a tyre up the kerb on a narrow residential street to avoid restricting road access to other vehicles while still allowing plenty of space for pedestrian access. Therefore better guidance and a definition of what is and isn’t appropriate would be a more practical solution, rather than an outright ban.”

The consulation can be viewed here: https://www.gov.uk/government/consultations/managing-pavement-parking?s=03

The Transport Committee has launched an inquiry to explore the problems of pavement parking in England and consider possible solutions.

IAM Roadsmart is warning that a blanket ban on pavement parking could leave thousands of homeowners without a parking space.

MPs on the Transport Committee have called for an outright ban on pavement parking across England and criticised the DfT for failing to take action.