New rules for towing a trailer come into force 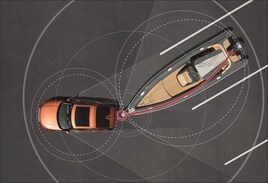 New rules about towing a trailer or caravan with a car, originally expected to take effect from November 15, have finally come into force.

The Driver and Vehicle Standards Agency (DVSA) announced yesterday (Thursday, December 16) that, after the fleet industry had been left in limbo following the month long delay, the new rules will now apply.

The DVSA announced in September that car and trailer driving tests would no longer be required, with the Driver and Vehicle Licensing Agency (DVLA) updating driving licence records automatically.

Category BE, it said, will be added to photocard driving licences when they are renewed. Tests finished from September 20, 2021.

What you now are allowed to tow?

If you passed your car driving test from 1 January 1997, you are now allowed to tow trailers up to 3,500kg MAM.

MAM is the limit on how much the vehicle can weigh when it’s loaded.

If you passed your car driving test before 1 January 1997, you are not affected by the change.

Driving a car and trailer for the first time

The DVSA says it is best to take training from a driving instructor if you want to start driving a car and trailer.

The ‘National standard for driving cars and light vans’ tells you about the skills, knowledge and understanding you need to tow a trailer or caravan.

You can also read about:

If you’d booked a car and trailer driving test

Car and trailer driving tests have now stopped. You can no longer book one.

If you had booked a test yourself, the DVSA says it has automatically cancelled and refunded it for you.

If your driving instructor booked your test for you, talk to them about what happens next, it says.

You cannot get a refund or compensation for any training that you’ve taken to help you prepare to take the test.

If you had previously passed a car and trailer driving test

You cannot get a refund or compensation for any training that you took to help you prepare to take a car and trailer driving test.

You also cannot get a refund for any tests you took, says DVSA.

New data from the DVLA shows that 92,000 drivers are at risk of losing their licence.

Government delays over new towing rules is leaving trained drivers unable to carry out their duties, according to Red Driver Risk Management.