Average CO2 emissions generated by new cars in Europe have increased for the first time in 10 years.

The Society of Motor Manufacturers and Traders (SMMT) advises fleet managers and individual drivers is to stay focused on getting the “right vehicle for the right job”, and to seek expert advice when considering a shift in vehicle fleet policy or choosing a new car.

With increased negative public perception towards diesels, combined with increased government regulation and scrutiny of the fuel type, the volume of diesel cars registered fell by 7.9% to 6.77 million units in 2017. In turn, diesel cars accounted for just 43.8% of total registrations in 2017, which is 11.1 percentage points lower than their peak, seen in 2011, and the fuel type’s lowest market share since 2003, when diesels accounted for 43.4% of total registrations.

By contrast, the manufacturer with the lowest overall CO2 emissions was Toyota, a brand that is making clear strides away from diesel towards petrol hybrid and other alternative fuels. 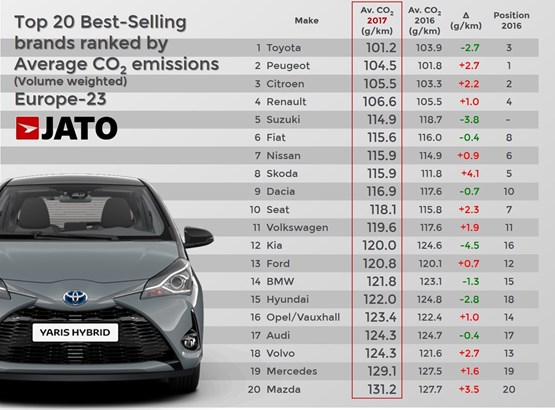 The correlation between the decline in demand for diesel cars and the increase in CO2 emissions was most evident in Europe’s largest markets. Diesel demand fell by double-digits in Germany and the UK, and in France and Spain it fell by 5.4% and 8.1% respectively. As a result, average CO2 emissions increased in all of these car markets. Increased regulatory requirements, combined with higher costs for OEMs to make diesels cleaner, have helped cause this reduced demand for diesels and as a consequence increased CO2 emissions.

The Government is being warned that that the anti-diesel agenda and the slow take-up of electric vehicles could mean the auto industry misses CO2 targets in 2021.

The PSA Group, which owns Peugeot, DS, Citroen and Vauxhall, has published the real-world emissions data for a range of its new models.