Pod Point has sealed a three-year preferred supplier deal with Fuller's, launching new charge points at 10 of its London and south-eastern venues.

With the new charge points, which are free to use for both customers and staff, Fuller’s wanted to appeal to the rapidly growing number of EV drivers on UK roads and further differentiate its venues from competitors.

Pod Point is also working with the pub company, which owns almost 400 managed and tenanted pubs and hotels, to carry out a trial monitoring average daily mileage. This data will help Fuller's identify which parts of its fleet could easily be switched to EVs.

Jonathon Swaine, managing director of Fuller's Inns, said: “We’re always looking to give our customers more reasons to visit our pubs and free charging will be a popular incentive for the growing community of EV drivers. We’ll seek to build on these initial installs and rollout to more pubs as the number of EV drivers continues to rise.”

Erik Fairbairn, Pod Point CEO and founder, added: “EV drivers will be saying cheers to Fuller's now that they can relax with a meal and a - non-alcoholic - drink while topping up their charge.

“EV charging should be something drivers don’t have to think about and having charge points available in locations where people typically spend an hour or more is hugely important in supporting the UK’s transition to EVs.” 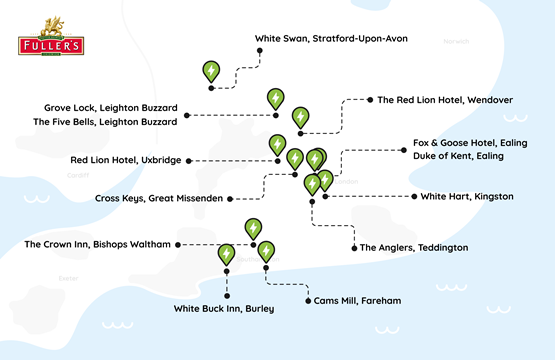 Pod Point has announced that it represents almost 30% of all UK PHEVs following a “huge growth” since last year.

Jaguar Land Rover and Nissan have awarded Pod Point with a preferred supplier agreement, which will see retailers and customers equipped with charge points.