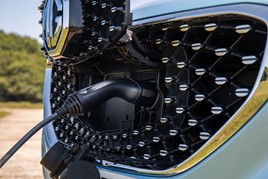 The Government has allocated an additional £2.5 million to fund more than 1,000 new chargepoints on residential streets.

Announcing the additional cash today (Monday, August 12), transport secretary Grant Shapps says the funding will support the on-street residential chargepoint scheme, launched in 2017, which aims to help people access charging infrastructure near their homes when they don’t have off-street parking.

It will go towards helping local authorities to install these chargepoints, which can be built into existing structures like lamp-posts.

The scheme aims to encourage even more people to choose an electric vehicle (EV) by making it easier to charge their cars near home and has already seen 16 local authorities say they will install 1,200 chargepoints this year.

The Transport Secretary is now doubling funding for the scheme to meet demand and accelerate the take-up of electric vehicles as the UK moves towards net zero emissions by 2050 and further improve air quality.

Shapps said: “It’s fantastic that there are now more than 20,000 publicly accessible chargepoints and double the number of electric vehicle chargepoints than petrol stations, but we want to do much more.

“It’s vital that electric vehicle drivers feel confident about the availability of chargepoints near their homes, and that charging an electric car is seen as easy as plugging in a smartphone.

“That’s why we are now doubling the funding available for local authorities to continue building the infrastructure we need to super-charge the zero emission revolution – right across the country.”

The allocation of funding for on-street residential chargepoints is part of the £1.5 billion investment underpinned by the Road to Zero Strategy.

The strategy supports the move towards a cleaner, greener, accessible and reliable UK transport network.

As part of this, the Government is also investing £37 million into British engineering to develop electric chargepoint infrastructure that could rapidly expand the UK chargepoint network for people without off-street parking and put the UK on the map as the best place in the world to own an electric vehicle.

The announcement today of extra cash for on-street charging comes after analysis from Deloitte claimed that the UK will need 28,000 public charging points in order to service an estimated 7 million electric vehicles (EVs) in circulation by 2030.

The research suggests delivering this infrastructure will cost some £1.6bn between 2020 and 2030.

With 13,500 points in the UK currently, according to other market data, that is around half the required number - most of which are likely to be replaced due to technological improvements in the next ten years, it said.

Daniel Brown, policy manager and EV lead at the Renewable Energy Association (REA) said: “On-street infrastructure plays a key role in the wider charging mix, along with those in homes, workplaces, retail sites and rapid chargers at motorway service areas.

“This is but one of several important announcements to come from Government in recent weeks, with others targeting the ‘smartness’ of private chargers, ensuring new dwellings with a parking space are equipped with a charger, and confirming a tax reduction for battery electric vehicles.

“As the number of electric cars and vans on the road is set to quickly increase as prices fall and availability expands, it is critical that infrastructure is in place now to support future drivers.

“We welcome Government’s continued support for the infrastructure build out.”

Chargepoints 'should be' for pure electric vehicles only

How fast electric vehicles (EVs) can be ‘refuelled’ could undermine efforts to provide an adequate public chargepoint network, suggests a new report for the RAC Foundation.