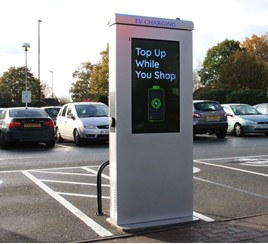 Supermarket chain Lidl has announced it will install rapid electric vehicle chargers at all of its new stores.

In addition to installing the Pod Point chargers in its new buildings, Lidl will also retrofit charging points into “a number of existing stores”, which together with new stores represents a total investment of over £25m.

The supermarket already has rapid chargers at over 40 of its stores, which it says have helped to power more than 6.9 million EV miles. Its new commitment means over a third of all Lidl stores (more than 300) will have rapid electric vehicle chargers by 2022.

Ingo Fischer, chief development officer for Lidl GB, said: “At Lidl, we are committed to tackling the environmental concerns that our customers care most about, whilst giving them access to solutions that will support them in their ambition to lead more sustainable lives.

“Not only will our customers be able to charge their electric cars in 50 mins – less time than it takes to do a big shop – they will be able to do it for the best price on the market. It is our hope that, through this significant investment, we will enable easier access to charging points, ultimately helping more households switch to electric vehicles.”

The points, which can charge vehicles from 0-80% charge in under an hour can be used via the company’s Open Charge mobile app. Chargers will have their own allocated and marked parking bays for use, and stores with charge points can be viewed via the Lidl app or on Zap-Map and Pod Point’s maps.

Morrisons recently unveiled its first 50 GeniePoint rapid charging points at its stores nationwide, with a further 50 planned by 2020.

Last year Tesco announced it was to install thousands of ‘free’ EV charge points across its network of sites.

In partnership with Volkswagen, Tesco aim to develop what it claims will be by the UK’s largest retail electric vehicle (EV) charging network, rolling out more than 2,400 Pod Point EV charging bays across 600 Tesco stores within the next three years.

Thinking of adding EVs to your fleet or choosing one as your next car? Find out which electric vehicle is right for you, here.

Volkswagen and Tesco will develop what they claim will be by the UK’s largest retail electric vehicle (EV) charging network, powered by Pod Point.

Pod Point has supported Mitie’s transition to an electric fleet with 800 new chargepoints by 2020.

Pod Point is once again making its 2,000-strong public charging network free on Clean Air Day, to promote the benefits of electric vehicles.