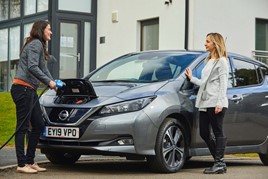 The clustering of electric vehicles (EVs) may already be more common than many people expect, applications to join the Electric Nation Vehicle to Grid (V2G) trial suggest.

The project aims to demonstrate how V2G technology can provide a solution to potential electricity grid capacity issues as the numbers of EVs increase.

More than one in five (20%) of the applicants to the Electric Nation Vehicle to Grid trial already have two or more EVs at their property, and 48% are either likely or very likely to acquire a second EV in the future, or they have already ordered a second EV.

Although the Electric Nation Vehicle to Grid trial is currently only recruiting households with one EV, these figures show that numbers of EVs per household are rising alongside increasing nationwide EV adoption rates.

Charging an electric vehicle at home is equivalent to an extra house in terms of electricity demand.

With many households liking their electric car so much that they either already have a second EV or are considering getting one in the near future, this ‘clustering’ will place further load on the local electricity network.

However, by using V2G technology, EVs can put energy back into the grid at peak times, so reducing the need for extra electricity generation or network reinforcement.

Electric Nation - a project of Western Power Distribution (WPD), in partnership with CrowdCharge - is recruiting 100 Nissan EV owners in the WPD licence areas of the Midlands, South West and South Wales to take part in the trial of Vehicle to Grid smart charging technology. Currently, only Nissan EVs are able to be used for V2G charging due to their CHAdeMO technology.

One week after the Electric Nation V2G project was launched, 200 EV drivers had applied to join the project, and the following data had emerged:

• 20% of applicants currently have two EVs at their property

• 1% of applicants have more than two EVs at their property

• 3% of applicants with one EV have ordered a second EV

• 41% of applicants with two EVs also had a Nissan LEAF as their second EV.

As well as many households having more than one EV, applicants are already taking action in the area of energy, with 45% having solar PV installed at their property, and 14% having a domestic stationary battery storage device.

With fleets, as the uptake of electric company cars increases due to favourable benefit-in-kind (BIK) tax bills and increasing vehicle availability, Fleet News looks at how will become more important for organisations to introduce charge points at workplaces.

The Electric Nation Vehicle to Grid trial is offering the free installation of V2G smart chargers worth £5,500 to Nissan electric vehicle (EV) drivers who live in the three WPD regions.

CrowdCharge is recruiting 100 people for the trial to help Distribution Network Operators (DNOs) and others to understand how V2G charging could work with their electricity networks.

The V2G trial follows the first Electric Nation project, which at the time was the world’s largest EV smart charging trial, providing real life insight into people’s habits when charging their vehicle.

The trial provided data from more than two million hours of car charging, revealing the user habits on timings of charge, where and for how long, as well as the impact of different tariffs.

By plugging in at specified times and putting energy back into the grid, active participants of the Electric Nation Vehicle to Grid project are expected to earn a minimum reward up to the monetary value of £120, available over the one-year trial period from March 2021 to March 2022. Recruitment is taking place from June 2020.

• Need to have off-road parking

• Will use the CrowdCharge mobile app to manage charging

• May need to have a new smart meter put in/updated as part of the project participation.

Although the application process for the Electric Nation Vehicle to Grid project is now open, the timescale for charger installations is subject to confirmation based on government advice in relation to Covid-19.

Vauxhall has revealed the all-new Mokka, which will go on sale later this year with a choice of petrol, diesel and electric powertrains.

Ford will use 5G to speed up electric vehicle production

Ford and its consortium partners have received government backing for the introduction of 5G connectivity to speed up electric vehicle manufacturing.