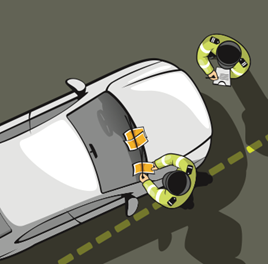 Drivers in Edinburgh and Aberdeen are acquiring more fines through shoddy parking than those living elsewhere in Scotland and the North.

Research by OSV looked at parking tickets issued across ten cities in Scotland, the midlands and the north of England.

The percentage of tickets issued against the driving-age population was higher in the Scottish cities analysed.

Birmingham has a driving age population more than double that of Edinburgh and yet research revealed Edinburgh topped the poll with a startling 43 per cent, while Birmingham had only 14% issued with tickets. Aberdeen followed closely behind Edinburgh with 39 per cent.

The top English city was Nottingham, with 38 per cent of tickets issued to the population old enough to drive, while fourth and fifth places went to Manchester (34%) and Newcastle (30%) respectively.

Of the towns and cities surveyed, Stoke-On-Trent was the best performer, with only 11 per cent of the driving age population being issued tickets.

Delving further into the distribution of parking tickets, OSV’s research identified the streets in each location where the most fines were issued.

While there are conceivably mitigating circumstances in Edinburgh, with only one NCP car park close to the George Street vicinity, which is the worst offending culprit, Aberdeen’s King Street is within walking distance of three multi-storey car parks.

At the other end of the scale, Alum Rock Road, which is the busiest site for traffic wardens in Birmingham, is the home of Heartlands, one of the city’s major hospitals, which may account for increased fines. The provision of adequate parking at NHS sites has been a topic of much controversy in recent years.

Andrew Kirkley co-founder of OSV, said: ‘It’s interesting to see the disparity in the spread of parking tickets. ‘What’s most surprising however, is just how many people run the risk of a parking fine at a time when most of us are trying to conserve money. There are a few measures that can be taken to help prevent this, always try and ensure you have enough change for meters, make sure you are in an allocated parking area. If you’re parking somewhere regularly, it might be worth investing in a long-term permit."