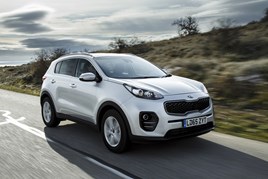 Kia will be showcasing the cars that are underpinning its continued growth in the UK at Company Car In Action, as well as hinting at how the range will soon expand.

Recent introductions such as the new Sportage, revised Optima and updated Ceed, will be available to drive alongside the Sorento seven-seat SUV, Soul compact crossover, Rio hatchback and Picanto city car.

The Optima underwent a major refresh earlier this year, and will soon be offered as a new estate in the forthcoming Sportswagon as well as the option of a plug-in hybrid powertrain.

Visitors to Company Car In Action will be able to get a taste of how the Optima performs as a diesel saloon, and talk to the Kia team about the forthcoming range developments.

The Ceed range, which includes the three-door Proceed and the Ceed SW estate, was revised late in 2015 with new technology and engines, as well as modified styling and the addition of a new GT Line equipment grade.

The GT Line is expected to boost the user chooser appeal in the new Sportage crossover range, combining the styling enhancements of a high-end model, but priced at the heart of the line-up.

John Hargreaves, head of fleet and remarketing at Kia, said: “The new Sportage, which has only been on sale since February, has exceeded the very high expectations we had for it. It is the fastest selling Kia we have ever launched and is performing well both in retail and all sections of the fleet market.

“CCIA will be one of the first major shows where the Sportage will be available to be driven and we expect significant interest. While we are trying to reach all the major fleets through our standard demonstration programme, CCIA will give us a great opportunity to expose the car to a large number of fleet decision makers.

“All new Optima is also a major car for us and with the arrival of a Sportswagon and PHEV version later in the year, we will be using this show to remind people what a superb car the Optima is. We also expect significant interest in the new Ceed with 1.0-litre petrol engine and our sports trim GT Line versions, which feature on both Ceed and new Sportage.”

Fleet operators can register for their free place at CCIA now at www.companycarinaction.co.uk