All-new Kia Rio to be launched at Paris motor show 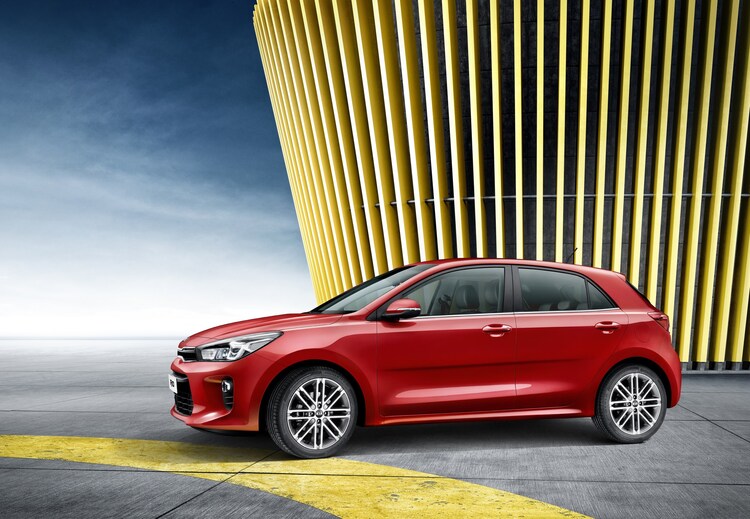 Kia has revealed pictures and details of its new Kia Rio, to be launched at Paris motor show.

Design of the new Rio was led by Kia’s design centres in Germany and California, in close collaboration with the company’s global design headquarters in Namyang, Korea.

The new Rio is available with a choice of black or grey cloth seat upholstery, or with black or grey faux leather. A ‘Red Pack’ for the Rio gives buyers black with red faux leather-trimmed seats throughout the cabin. The cabin itself features gloss black and metallic trim throughout, for a more modern finish.

​The Kia Rio is the Korean manufacturer’s best-selling model globally, with more than 473,000 sold around the world in 2015. The next generation will enter production towards the end of 2016 for the UK, with production timings for other regions to be announced closer to launch.

Changes to the front of the car, including moving the fog lamps’ position outwards within the front bumper, are designed to add greater visual width for a more stable overall look. The new Rio grows by 5mm in width (to 1,725mm), further adding to this effect.

In profile, the fourth-generation Rio includes a 10 mm longer wheelbase (up to 2,580 mm), a thinner, more upright C-pillar, and a shorter rear overhang. Overall, the new car is 15mm longer than its predecessor (now 4,065mm long), and 5mm lower in height (to 1,450mm).

The rear section of the Rio is now more upright, with a near-vertical rear windscreen and a shorter overhang. The straight line that runs from the grille, through the headlamps and along the top of the doors, continues around the back of the car, paired with thinner, more sculpted rear lamps, which now feature a new arrow-shaped LED light signature.

The dashboard itself is now angled towards the driver, and at its center is a new infotainment system with a high-resolution touchscreen to power the Rio’s audio, navigation and new connectivity systems. The new HMI has allowed Kia to reduce the number of buttons on the centre console.