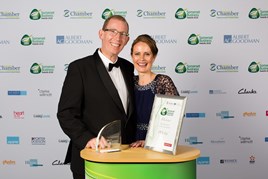 Puddy Vehicle Solutions (PVS) has been awarded with the New Business of the Year title in the 2016 Somerset Business Awards after identifying how clients could make savings totalling more than £64 million.

Launched 14 months ago by Marcus Puddy, formerly at Lex Autolease, PVS provides advisory and management services to businesses operating company cars and vans and a consultancy to contract hire and leasing companies, manufacturers and dealers.

The Awards, organised by the Somerset Chamber of Commerce, are in their 12th year and are designed to celebrate business success across the county, raise the profile of locally-based businesses both regionally and nationally and encourage growth within start-up organisations.

One of the judges, Duncan Sykes, from Award sponsor and law firm Foot Anstey said: “We were impressed with the speed of progress that PVS has made in such a short period of time. The speed with which it has grown from infancy to working with such a stand out client list was impressive. PVS is a testimony to the great bedrock of business there is in the region. It was great to see the top talent of all of our three finalists; how far advanced and progressed they are is a true testament to their workforce.”

Puddy, who launched the business with his wife, Louise, said: “PVS has gone from strength-to-strength winning contracts with organisations across the UK. We have worked with numerous businesses highlighting where cost reductions and service improvements can be made.

“PVS in its first year of trading provided services for some 15 companies, eight of which were large blue chip organisations. We have worked to enhance the commercial proposition of those companies having identified cost savings collectively totalling more than £64 million.

“It’s remarkable to have achieved so much as PVS was only launched in August 2015. The Award is a great accolade to receive.

“Effective fleet management solutions positively affect the environment through efficiency gains. The savings identified by PVS for its customer base are substantial equating to many millions of pounds making UK commerce stronger and more competitive. The result is lower operational costs for organisations which could be reflected in lower service costs to the public at large.”

Since the launch, the service has expanded to PVS Vehicle Logistics, which provides fleet logistical services to end-user fleets and contract hire and leasing companies.

Puddy anticipates that he will recruit additional staff in 2016/17 - its second year of trading - as it continues to expand its customer base.