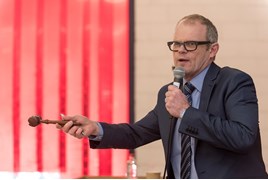 Three-year-old ex-fleet stock remained extremely strong throughout 2016 and into Q1 2017 at Shoreham Vehicle Auctions, due to the continued high demand in the used market.

The Lancing-based auction house witnessed consistent demand for three-year-old models from all manufacturers throughout the last year, which has continued into January and February, despite the ever-increasing pressures from new and pre-reg volume.

Alex Wright (pictured), managing director at Shoreham, said: “With buyer demand, residual values of three-year-old stock is very strong and far enough away from the price of new vehicles sold through PCP to affect used sales of defleeted models.”

“Despite rising PCP pressures forecast during the plate-change period and before the planned Vehicle Excise Duty increases in April, we expect the used three-year-old, ex-fleet market to remain buoyant, even with an influx of stock expected soon after.”

Shoreham Vehicle Auctions has seen buyer interest and demand in used light commercial vehicles remain extremely strong in August, gradually going against the trend of a traditional summer slowdown in the market.

Having reached record levels in recent months, values for fleet/lease and dealer part-exchange vehicles at BCA fell during December 2016.

Online sales values of ex-fleet stock beat physical auctions by an average of 1% or £220 per vehicle in 2016, according to new figures compiled by Epyx.