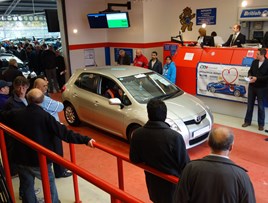 BCA has renewed an exclusive remarketing deal with Jemca Car Group until 2022. The contract will see around 3,000 cars a year sold at BCA London in Enfield.

Jemca Car Group operates seven Toyota and four Lexus dealerships around London. Formed in 2003 it is now established as one of the largest Toyota Lexus groups in the UK.

Simon Boxall, COO of Jemca Car Group, said: “BCA offers an intelligent and technology led approach to remarketing. We have enjoyed a long working relationship with BCA, and over that time they have continued to deliver excellent results and a seamless service for remarketing Jemca’s non-retail part-exchange and overage vehicles.”

Cars from Jemca Car Group are sold at BCA Enfield every Tuesday, with all vehicles available to BCA Live Online buyers. All vehicles are pre-sale prepared, and all eligible vehicles will be offered under the BCA Assured scheme.

Alan Dyer, national account manager at BCA, said: “We are delighted to have secured this new long-term deal with Jemca, which reflects the excellent working partnership we have developed.  It is also testament to the hard work of the team at BCA London who consistently deliver strong results for this important customer.”

Dealer group Steven Eagell has renewed its exclusive remarketing partnership with BCA for a further year.

The north-west and midlands-based dealer group has announced a new remarketing partnership for cars and commercial vehicles.

Hankey returns to BCA after five years in Australia

Having recently returned from a five-year sojourn in Australia, Mark Hankey is returning to BCA to take on a group business development role.