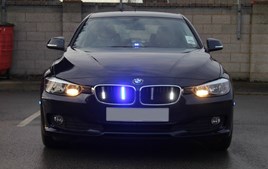 HMRC has rejected suggestions that it is unfairly penalising undercover police for company car tax following changes to the way emergency vehicles are charged for private use.

Unmarked police cars can be taken home to help improve response times to emergency call-outs rather than officers having to drive to a depot to get a marked car.

Until April 6 this year, officers with a car they used for police work and personal use were taxed on their personal mileage. Officers would record any personal mileage and report this as part of their job.

However, since April, the rules were brought in line with wider benefit-in-kind (BIK) tax rules for company cars which now makes some officers liable for tax based on the vehicle’s P11D value, the number of days the vehicle is available for their private use and an environmental levy.

The officer’s salary also determines whether they’re in the basic 20%, higher 40% or additional 45% banding.

This has meant tax payment increases potentially amounting to thousands of pounds due to the fact most undercover officers use high-performance response vehicles which have high P11D prices and high emissions.

Undercover response vehicles are therefore likely to attract the same sort of tax that would be expected by user-choosers such as company directors who often pick their own company car outside of an approved choice list.

However, a spokesman for the HMRC told Fleet News: “There is no question of a police officer or any other emergency service personnel who use officially provided vehicles incurring any tax when they are using the vehicle just for work.

“Tax can only be payable on the vehicle when it’s made available for purely private reasons.”

According to the HMRC’s employment income manual, if an officer is provided with an ordinary saloon car, to which the driver may attach a de-mountable flashing light, the car is no different from any other company car except when attending an emergency. Consequently a car benefit charge applies.

The HMRC declined to comment further other than to say the changes were not driven by them and were ‘legislative’.

While the HMRC is dismissive of the changes, the Police Federation said ‘officers should not be penalised for doing their job’.

Andy Fittes, Police Federation of England and Wales general secretary, said: “While the changes are likely to impact only a small number of federated officers, they could ultimately affect the officers’ ability to carry out their vital role in keeping the public safe from significant harm and officers shouldn’t be penalised for this.”

Fittes said the National Police Chiefs’ Council (NPCC) is working with the federation to understand the issues facing officers.

An NPCC spokesman said officers will be affected in situations where force-owned assets are made available for private use, but it also said the issue only relates to “a small number of officers”.

The spokesman said: “The changes are actually quite complex and there is work ongoing to address it.

“The NPCC is supporting forces as they assess the implications of tax designation for force-owned assets made available for private use.

“We are working with chief constables and the Police Federation of England and Wales to understand the impact they will have on individual arrangements, and will ensure that the changes do not affect the ability of any police forces to protect the public.”

Police vehicles previously came under the spotlight in 2015, when several forces in England gave company cars with bluelights and sirens to civilian staff not trained to use them.

Finance, HR and IT directors were among nine senior staff given the vehicles which could save them thousands of pounds each year, as emergency vehicles were treated differently by HMRC.

The forces said the vehicles were part of their wider fleet, and denied they were provided for tax reasons.

Fleet operators call for clarity on the future basis of vehicle taxation beyond the current system of CO2 emissions derived from the combined mpg figure.

Drivers’ ignorance of benefit in kind tax charges is proving a boost to the taxman.

Manufacturer discounts of up to 35% on some new cars have called into question the relevance of the P11D price in company car tax calculations.