Diesel continues to be the dominant fuel choice for cars across the FN50 with a 71.4% share but there has been a greater uptake of petrol, hybrid and electric cars this year.

Is this a result of the Volkswagen Group emissions scandal and the ‘demonisation’ of diesel in the consumer press?

In the vast majority of cases ‘no’ is the answer, according to major leasing companies.

David Watts, consultant at Arval, says: “You’ve got a small number of people who are reacting to market pressure, a small number who are very environmentally-orientated but the majority of people are doing it for the usual reasons, tax being the primary one.”

ALD Automotive’s consultancy services manager Matt Dale suggests that initially some companies were taken aback by the emissions scandal and were concerned about its potential implications but “that very quickly disappeared”.

“We now have people who are looking at their policy in a more detailed way when it comes to the different fuels and you’re getting to the point where it is almost a driver-by-driver basis,” he says.

“I haven’t yet come across anybody that has said ‘I will not take diesel on my fleet any more’* but we have come across those who have said ‘we want to accelerate the opportunity for implementing plug-in hybrid and electric vehicles’.”

He adds that “there is still a place for diesel”, particularly for high mileage company car drivers, and that “Euro 6 diesel is not a problem”.

Pure electric currently makes up 0.2% of ALD’s fuel mix for cars (with diesel accounting for 67%, petrol 31% and hybrid 2%), although this may rise as electric cars have accounted for 0.42% of orders this year.

“Pure electric is a little bit slower because if you take Tesla out of the equation you’re still sub-200 miles for a pure EV,” Dale says. “The new Nissan Leaf is almost a game-changer and that’s going to break that 200-mile NEDC range and we are seeing people looking at EVs from a pool fleet point of view and opening it up to more fleet policies.” 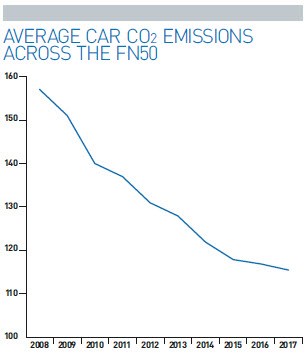 But as the take-up of electric and hybrid increases, both Dale and Watts warn that companies must ensure they have the right policies in place.

Dale says fleet managers need to be “strong enough” to say to their drivers they cannot have a plug-in hybrid vehicle or electric vehicle if they don’t have somewhere to charge it.

Watts adds: “We have seen companies who have just allowed plug-in hybrids onto their fleet and haven’t thought through the implications. If they’re paying mileage reimbursement, what do they pay them in the absence of an AFR (advisory fuel rate) from HMRC?

“They’ve only thought about that six months later when people have suddenly got the cars.”

The other challenge fleet operators might face is that drivers may simply not bother to charge a plug-in hybrid vehicle, particularly if they have fully expensed private fuel, negating the benefit of having a PHEV.

“It’s about making a few key decisions so the policy is structured in the right way,” Watts says.

Of the top 10 leasing companies, Alphabet has the highest proportion of pure electric cars on its fleet, with 1.7%, followed by LeasePlan (0.5%). Hybrid cars account for 6% and 5.15%, respectively.

Simon Carr, chief commercial officer at Alphabet, says the company has “a longstanding commitment to help customers switch on to the benefits of ultra-low emission vehicles (ULEVs)”.

“We understand that while electric and hybrid powertrains may not be appropriate for every business user or journey today, our role is to support and guide organisations in adapting to the change for tomorrow,” he says.

He adds: “Even with uncertainty in so many areas, it’s clear the overall direction of travel is towards ultra-low emission vehicles. Alphabet has delivered to its customers nearly 9% (8.9% or 2,357 vehicles) of the UK’s total number of OLEV grant-eligible electric and plug-in hybrid vehicles registered year-to-date (private and business usage combined).

“These statistics are demonstration ahead of this autumn’s Budget of the hugely important role the company vehicles and business users have played – and will continue to play – in helping to support the UK’s transition to low emission, sustainable mobility.”

Smaller leasing companies are playing in their part in the adoption of electric and hybrid.

For example, Hilton Vehicle Leasing, which sits at number 38 in this year’s FN50, has the highest proportion of electric cars (9%) on its car fleet and electric accounts for 21% of its car orders this year.

Simon Hill, managing director of Total Motion, says: “The main reason is that for the past 10 years we have worked with our clients on wholelife costs and pushed low emission cars and also incentivised them.”

The shorter leases Total Motion has been writing has also had an impact more recently, as has taxation.

Three other leasing companies have sub-100g/km emissions: Traction Finance (95g/km), Wheels4Sure.com and Fleet and Distribution Management (both 99g/km). The next lowest is Free2Move Lease with 101g/km.

This is likely to be due to drivers moving into Euro 6 diesel cars, as well as hybrids and EVs.

Whether any announcements in the Budget later this month will impact on diesel uptake remains to be seen but it is clear the Government is pushing ahead with its air quality agenda with a string of announcements, including ending the sale of all “conventional petrol and diesel cars” by 2040.

Fleet operators also need to be mindful of the cities they operate in and what policies local authorities may adopt. The ultra low emission zone (ULEZ), which the mayor of London wants to introduce in 2019 (ahead of its original implementation in 2020), will allow Euro 6 diesel cars to enter and clean air zones are also expected to allow this standard.

However, Oxford City Council and Oxfordshire County Council are now proposing a ‘zero emission zone’ in Oxford city centre, which would be introduced in phases, starting from 2020.

Watts advises fleet operators to also consider their grey fleet drivers, including their cash allowance population, who are likely to be in older, more polluting vehicles.

Reminding fleet operators to keep abreast of Government and manufacturer announcements, Dale adds: “You can’t write a fleet policy now, leave it for four years and then come back to it, fleet policy is constantly evolving.”

And forward-thinking fleet operators are now asking their leasing companies to help calculate their NOx footprint as well as their carbon footprint.

* Dale Eynon, head of the Department for Environment, Food & Rural Affairs (Defra) fleet, has declared it will not place any more orders for diesel cars (Fleet News, October 26).

Just one quarter of FN50 customers are on sole supply contracts with their leasing provider, lagging well behind cars, where 37% are happy to sign up to solus contracts.