The UK light commercial vehicle (LCV) market is often seen as a barometer for the health of the economy. While 2016 was a record year for van sales, 2017 has cooled down.

The high volume of previous years could be one of the factors influencing expectations of a fall in residual values (RVs) among FN50 companies in 2018.

Concerns about diesel could be another, although there is a shortage of alternative options for fleet operators.

Renault and Nissan have offered small electric vans for a number of years, but the large 3.5-tonne market has seen a shortage of options, aside from Iveco’s electric Daily. That will change over the coming months as Volkswagen brings its electric eCrafter to market and Renault puts the electric Master ZE on sale.

These vehicles will enable leasing companies to dilute their reliance on diesel vans at a time when the Government is considering ways to penalise drivers, which could include increasing the rate of duty on diesel.

However, as Lex Autolease managing director Tim Porter pointed out: “ vans are a long way off yet. It’s diesel for the foreseeable future, but they will become more efficient.”

The LCV market in the UK is still predominantly made up of outright purchase sales, although FN50 company risk fleet vans in 2017 totalled more than 406,000 – a significant proportion of vehicles on the road. 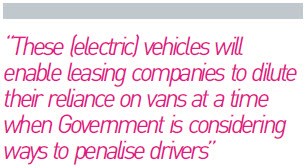 That is significantly highly than last year’s -3.5%, although more companies were forecasting a downturn in FN50 2016 (72%).

The Society of Motor Manufacturers and Traders (SMMT) has already spoken about falling business confidence due to uncertainty over the UK’s trading relationship with other countries following its withdrawl from the European Union in 16 months’ time.

With the date for Brexit set at the end of March 2019 and negotiations continuing, there is no clear guidance forthcoming in the short-to-medium term.

However, not all leasing companies are predicting a fall in van residuals: a quarter of respondents believe there will be no change in RVs in 2018, while almost one-in-10 (9%) expect them to increase. The average expected increase from these companies is 4% – the same as last year. 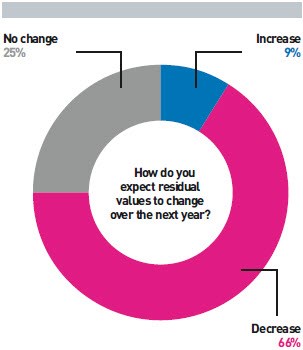 A number of large vans hitting the market as three- or four-year-old vehicles over the past 12 months include the Mercedes-Benz Sprinter and Ford Transit, both launched in 2013, with the Fiat Ducato, Citroën Relay and Peugeot Boxer now at three years of age.

It is likely that fleet lifecycle changes that witness greater volume of particular vans on the used market will increase pressure on values, especially on the back of record years for new van registrations in the UK, and reduced business confidence potentially affecting investment.

This is a factor that is exacerbated with so many manufacturer partnerships to jointly develop light commercial vehicles, resulting in a smaller pool of platforms to create differentiation. Points of difference might merely be the number of safety and convenience options fitted, and natural bias over badges, which could make one van more desirable than another and improve its chances of sale.

A key selling point to fleets over the knowledge and service offered by the retail networks, some of which are dedicated to vans, is of less importance in the used market.

More responses stated an improvement with 15 companies stating values at 100% of Cap Clean or higher, with the highest at 121%.

This could be a sign of effective adoption of fair wear and tear guidelines by fleet operators, and leased vans perhaps being treated more favourably than those bought outright, with greater care taken to avoid abuse and damage.

However, the average resale value of 93% of Cap Clean, is down eight percentage points on 2016.

Despite this, leasing providers appear more willing to accept the lower bids rather than presenting vans for a second time at auction. Average defleet days remain static on 2016 at 21 days, according to FN50 respondents, one day less than the average reported for cars.

Almost half of the companies that responded reported a lag of two weeks or less then it came to selling defleeted vans, although many of these are among the businesses with smaller risk fleets.

A few companies even reported vans being remarketed in less than a week.

Eight companies reported times of 28 days or longer, fairly evenly spread throughout the table, with the highest at 48 days.

This could be an area for improvement, as a van would have almost two further months of depreciation, reducing the return on investment.

Reducing this lag to within a month, which most FN50 companies succeed in, could result in significant savings multiplied across a fleet of vans.

It should also be a KPI used by fleets to assess the performance of their leasing partners, as any reduction in re-sale price will affect future leasing rates.

So, for light commercial vehicle remarketing, what is replacing physical auctions?

Surprisingly not online auctions. They remain unchanged over the past four years at 5% of volume – although those companies that do use online auctions are bought into the process, choosing to sell 16% of their vans this way.

Leasing companies opting to go to dealers put 38% of volume there, while those selling direct to the public say it accounts for 30% of their vans, although the ratio ranges from 5% to 97%, dependent on the company.

Six FN50 companies remarket 50% or more of their vehicles to dealers, and three of them sending volume of 75% or more. These heavy users tend to be van specialists or dealer/manufacturer-owned businesses.

Sale to driver is a well-used option among contract hire companies, although it accounts for relatively low volume. An average of 4% of vans from 17 companies (accounting for 2% of all FN50 vans) are sold in this way, with the proportion varying from 1% to 9% across the listing, and it seems just as popular among the top 10 contract hire companies as those placed from 41-50.

However, despite the continued (albeit small) swing towards dealer and public remarketing, physical auctions continue to take the lion’s share of the light commercial vehicle market.

For those using them, they account for 68% of volume. Almost half send at least 90% of their vehicles to the used market in this way, with five companies stating their entire van fleet goes through physical auction.