Car brands are expected to put more focus on customer service from 2018 now that the UK’s new car market evidently passed its peak in 2016. This year the total market is in decline and fleet registrations had dropped by almost 23,000 units (2.1%) by the end of September.

So after five years of sales growth, carmakers will now put franchised dealer networks and their own central fleet teams under increased pressure to retain the customers they have by being easy to work with and providing great service and incentives.

This should be welcome news for fleets and other business customers. Two-thirds of the 30 FN50 companies which answered our question about service, maintenance and repairs (SMR) said they would either maintain or increase the level of SMR done by franchised dealers on their cars in 2018.

For their vans, however, slightly fewer intend to do so.

Land Rover’s first appearance in the top 10 rated dealer networks (at 8th) is the big change in this year’s FN50. The SUV brand has been rising towards the rankings for the past two years (13th in 2015 and 11th in 2016) and now leasing companies have allowed it into the major league.

A catalyst to its success, apart from developing more fleet-friendly two-wheel drive ED4 versions of Discovery Sport and Range Rover Evoque, has been the radical overhaul of its dealer network, which Jaguar Land Rover began in 2015 and aims to have completed by the end of 2018.

It is being overseen by UK managing director Jeremy Hicks, who made similar magic at Audi in the previous decade. The new strategy has meant that some of JLR’s smaller partners have sold their dealerships to major dealer groups such as Inchcape, Jardine Motors Group and Marshall Motor Group, which have extensive experience of handling high volumes and serving corporate clients.

Such groups also have the financial capability to invest to meet the standards JLR now demands – these are typically £5-10 million, dependent on the location.

Many Land Rover dealerships are being twinned with Jaguar ones (expect Jaguar to enter the FN50 table at the end of this decade) in new-built, larger premises with more staff, more technology and higher service levels.

Jardine Motors’ Milton Keynes Jaguar Land Rover dealership, for example, has automatic number plate recognition (ANPR) cameras to identify if a vehicle entering the site is booked in for servicing, whereupon it is directed through the doors of an enclosed drive-in service lane fitted with automated tyre depth and pressure reader.

There the company car user can swap into a courtesy car, still sheltered from the elements, or can wait in a business lounge while their car is serviced.

In addition to the dealers’ record £1 billion of investment in facilities, JLR has also invested in its corporate sales structure. A dedicated field-based sales team was introduced across 50 Jaguar and Land Rover retailers in 2016, supported by a further 22 people centrally and led by five senior-level managers responsible for fleet and business sales.

As Jon Wackett, general manager for fleet and business at JLR, tells Fleet News: “We’re not complacent – and the customer remains pivotal to everything that we do.”

His ambition is for leasing companies to “recognise Jaguar Land Rover as a fully established supplier”, he says, and he believes it can now offer the security of supply and ownership it has been working towards.

Land Rover’s entry casts further shadows over the long-term strength in fleet and leasing of more mainstream brands. The FN50 has a clear flavour of premium and near-premium brands, German ones in particular, which typically have stronger residual values and attractive running costs plus dealer networks which are raising the service levels bar.

Take Nissan, for example. It has featured in the top 10 for the past three years, but has now been squeezed out at a time when its dealer network has become demoralised by low profitability and poor manufacturer relations.

Honda, too, has left the top 10, despite expanding its ‘Platinum Programme’, which the Japanese brand sees as a key part of its corporate and fleet proposition, to 100 dealers. Sites on the programme provide 48-hour test drives for corporate customers, and put sales managers and advisers through specific training to support business clients on mileage, taxation and contract terms.

This year, Toyota is the only Asian brand registering on FN50 radars. Under managing director Paul Van der Burgh, the brand has strived to become easier to work with, from both their dealers’ and corporate clients’ perspectives.

Earlier this year it developed a new ‘concierge’ service for leasing companies with the aim of offering them a ‘one-stop shop’. It allows Toyota to break the traditional model of leasing companies nominating their preferred dealers for car supply, with Toyota instead ensuring the dealership closest to the contract gets the business.

Neil Broad, general manager for fleet and remarketing, told Fleet News he expects a better service for fleets as a result, because it will encourage the retail network to improve customer service, such as prioritising company car drivers for demonstrator cars, and stabilise pricing by eliminating competition for every deal. Arval was the first to sign up for the new voluntary scheme, which is being deployed over a three-year transition period.

Toyota is supporting the programme by expanding its area fleet sales team from eight to 11 and doubling its contract hire team to two. It is also putting emphasis on its fleet hub operation to free up regional managers’ time for prospecting.

The programme also links to a used car repatriation initiative Toyota launched in 2016 where it offers leasing companies access to its retail network via its own auctions.

However, at present Toyota can but dream of overcoming the FN50’s love of German brands. BMW remains at the top of the table for the sixth time since 2010, ahead of Audi, Volkswagen and Mercedes-Benz. All have networks of engaged dealers, well experienced in corporate sales and service, and capable of handling larger fleet volumes, with field and central support from their brands. 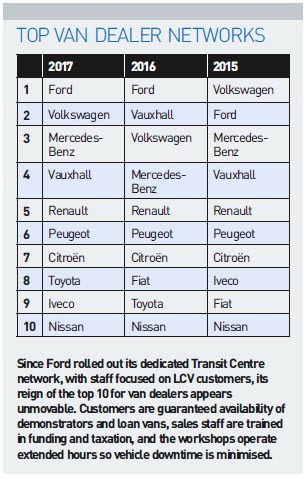 With BMW, business customers also benefit from its aftersales corporate charter, which guarantees minimum service levels from its dealer network, such as 1Link bookings receiving a response within 20 minutes and free collection and delivery within a 15 mile radius. It also guarantees that where a driver has booked to wait, the car will be back on the road within 90 minutes.