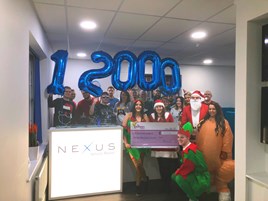 Leeds-based Nexus Vehicle Rental has raised more than £12,000 for St Gemma’s Hospice in its first year of fund-raising.

Nexus’ partnership with St Gemma’s Hospice, Yorkshire’s largest hospice, was established in January this year, with a further 12 months of fundraising pledged by the rental firm.

St Gemma’s was chosen as Nexus’ charity partner by its employees, following a previous partnership with the Yorkshire Air Ambulance.

The £12,000 has been raised through a number of activities in 2017 including team members taking on the gruelling Yorkshire Three Peaks challenge and competing in company football tournaments.

The largest amount came from a rowing challenge across Lake Windermere, with participants from Nexus securing over £3,200 in sponsorship.

CEO of Nexus Vehicle Rental, David Brennan, said: “We’re immensely proud of the work we’ve done this year to raise £12,000 for such an important cause.

"Our charity partnerships, are a massive part of life here at Nexus. The team really get behind each and every event and it’s because of them that we’ve been able to successfully raise such a substantial amount – an average of £1,000 a month.

“Allowing the team to vote for a chosen charity partner makes it a personal endeavour for all of us and as a Leeds-based company, giving back to the Yorkshire community is something we feel extremely strongly about. It’s a real achievement for all of us.”

In order to gain an insight into how the charity operates and to offer first-hand support, Nexus has also donated 72 hours of volunteering to the St Gemma’s sorting hub, helping to organise charity shop donations and, through its own company ‘donation days’, has collected more than 130 bags of items for use in St Gemma’s shops.

Nexus Vehicle Rental has delivered double-digit growth in revenue and profit for the fourth consecutive year for the period ending September 30 2017.

Nexus says that from a fleet and business motoring perspective, after months of uncertainty, today’s budget has been a mixed bag of news for business.