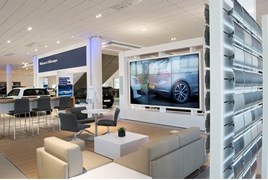 Fleets could be faced with having to use significantly smaller dealer networks in the future after UK automotive executives said they expect almost half of all car dealerships will disappear in less than a decade.

KPMG's Global Automotive Executive Survey 2018 found that 75% of UK automotive executives think that 20-50% of the brick-and-mortar retailers will no longer exist by 2025.

Justin Benson, UK Head of Automotive at KPMG, said: “The majority of UK automotive executives are convinced that the only means for dealers to survive is by restructuring into a service factory or a used car hub in the future.

"This is certainly a warning sign for physical retailers and presents a need to rethink retail concepts and business models, particularly with customers purchasing more of their goods and services at the touch of a button.”

The report findings also revealed that 63% of UK automotive executives believe that by 2030 the global share of vehicles manufactured in Western Europe will drop significantly, to less than 5%.

Benson added: “While it sounds dire, the truth is that sustainable growth can only be generated in Asia, based on current market forecasts, and this is reflected by the opinions of UK automotive executives, and Western Europe is home to numerous premium brands.

"So European carmakers need to make use of the technologies offered by Industry 4.0, the internet of things; and data analytics to take advantage of opportunities to manage costs and continue to be globally competitive."

Three out of four consumers highlighted data and cyber security as a prerequisite for their purchasing decision, suggesting that the companies who fail to provide this will suffer severe consequences.

Benson added: “Data ownership is a sensitive issue, and the question of who owns the data generated by vehicles and consumers on the go is one that is yet to be answered.

"What is clear is that consumers predominantly only trust themselves, and with data breaches and hacks making headlines in recent years, who can blame them? What is interesting, however, is that almost one in three executives believe that car manufacturers will be the data guardians.”

Many automotive companies have started capitalising on opportunities provided by the shift to a digital future by providing digital services, as well as selling cars.

Seventy-five per cent of UK automotive executives think that data is going to be the fuel for the future business model of automotive companies, as the shift towards an autonomous vehicle future accelerates.

Benson added: “In the UK, our findings are clear on one thing, there are more significant disruptors to the automotive sector than Brexit.

"Electric vehicles, autonomous vehicles and Mobility as a Service (MaaS) are going to drive change in the automotive sector for the foreseeable future.

"New business structures and new economic models are on the horizon, driven by these disruptors and the associated new technology.

"It’s an exciting but uncertain time for the industry. Whilst our report highlights concerns in some of its conclusions, it also helps chart a path to future success."