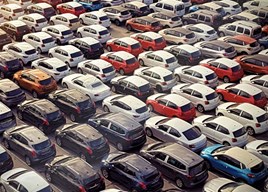 The triggering of Brexit and a new wave of taxes caused the UK’s true fleet market to shrink last year, says Dataforce.

It was the only one of the EU’s largest five economies to see a contraction, with Spain, France, Italy and Germany all beating last year’s record numbers.

Dataforce says each of these countries had market-affecting events which could have altered these outcomes, but they did not de-rail the growth of their fleet markets.

For example, Spain had its government denounced but state-approved Catalonian independence referendum, France had presidential election with controversial candidates, while Italy saw the end of the super-amortisation benefits for the majority of company cars.

However, the UK market was the exception with its fleet segment (along with the other segments) feeling the pinch and starting to contract.

Dataforce said this was “no doubt influenced by the new wave of vehicle taxes implemented from April 1 and the triggering of Brexit, which in the eyes of the population, remains shrouded in mystery, as to just what this will mean for them post March 29, 2019”.

The fleet market posted a 5.8% drop in new registrations in 2017 while at the same time the absolute volume was still one of the highest. 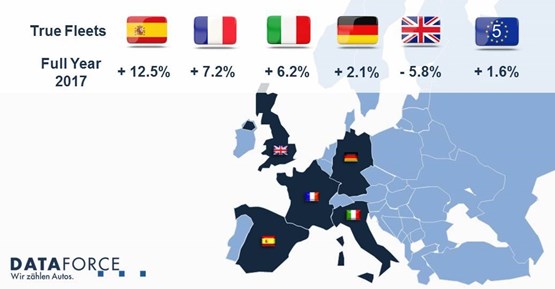 One half of the top 10 brands improved their results with two of them growing at double-digit rates while the other half had to bear the losses.

Ford secured the top spot thanks to a less negative outcome than second-placed Vauxhall.

Volkswagen was third with 7.6% growth, and Dataforce expects it to challenge Vauxhall for second place in 2018.

Mercedes-Benz are fourth after its true fleet registrations grew 5.6%, with the A-Class, GLC and E-Class proving popular.

On the next ranks Nissan, Audi and BMW each retained their positions but Hyundai vigorously pushed themselves into the number eight spot.

The Korean manufacturer secured its 21.5% rise not only from the usual SUV growth but also from the Ioniq, which is available in hybrid, plug-in hybrid and pure electric variants.

Two other manufacturers that took advantage from the market’s move into petrol and hybrid were Toyota and Kia.

Toyota’s true fleet registrations were up by 16.0% fuelled almost completely by the latest addition to their range, the C-HR with four out of five fleet customers opting for the hybrid powertrain.

The latest entry to the top ten was another Asian brand. Kia expanded its 2017 fleet sales by 6.5% and while a couple of their models increased their registrations the Niro delivered the biggest push.