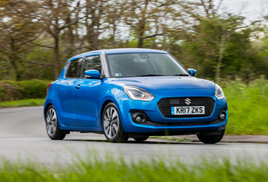 Suzuki was the biggest winner in a shrinking UK true fleet market with its December registrations growing 151.7% in the sector, says Dataforce.

The overall market fell for the ninth consecutive month. In a total market which declined 14.4% to 152,000 registrations in December, true fleet was down 9.9%, while the private market and special channels took the heaviest hits with falls of 15.9% and 18.6% respectively.

However, within this, Suzuki's true fleet growth saw its annual registrations rise 99.4% over the year, with the brand entering the five-digit registration club in the UK for the first time, missing doubling last year's volume by just 33 units.

Other winners were Toyota which grew 24.5% in December. This helped propel the Japanese brand to its best year on record since 2008.

Dataforce said worthy monthly mentions also go to both Skoda (+19.6%) and Hyundai (+17.8%) with the latter’s Ioniq model narrowly (25 units) missing out on securing a top four finish inside the brand's yearly rankings.

The SUV segment was one of three bodystyle sectors which grew in true fleet in December.

The Nissan Qashqai took the crown followed by the Ford Kuga, which saw registrations grow 145.8%, with the Hyundai Tucson, VW Tiguan and the Kia Sportage rounding out the top five for the month.

The Mini Countryman had its best month since March 2014. The Cooper SE - ALL4 version (plug-in hybrid) of the Countryman out-registered the four diesel engine versions available for the third month in a row.

The low weight on the all-new Suzuki allows the Swift to score a welcome hat-trick.

Land Rover's share of the true fleet market hit a record high of 2.5% in November, analysis by Dataforce has shown.