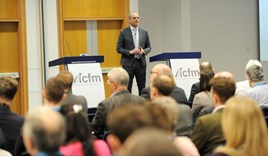 The ICFM is celebrating a record-breaking 12 months, with unprecedented demand for training courses and is closing in on achieving the 1,000-member milestone.

A record 250 fleet professionals attended the 2018 ICFM Annual National Members’ Conference, which celebrated 25 years of the training organisation and looked to its future “amid a massive state of flux”.

A changing world of population growth, globalisation, a ‘connected world’ with the Internet of Things and Mobility-as-a-Service, pollution, a scarcity of natural resources, global instability, the changing behaviour of generations Y and Z and congestion were among the issues, said ICFM chairman Paul Hollick, that meant the traditional vehicle ownership model would change.

With legislation driven by global challenges, the world, including fleet decision-makers needed to adapt, Hollick told the conference, held on Tuesday (March 20), at The British Motor Museum, Warwickshire.

The unprecedented list of key issues confronting the fleet industry over the next 24 months included, said Hollick, the continuing ‘demonisation’ of diesel amid air quality concerns and the introduction of the General Data Protection Regulation (GDPR) on May 25.

Furthermore, fleet decision-makers were having to face up to future company car benefit-in-kind tax increases, the introduction of ultra-low emission and plug-in vehicles and the continuing fall-out from the April 2017 introduction of Optional Remuneration Arrangements (OpRA).

Hollick said: “The future is approaching faster than we think. The time to act is now. The challenges faced by fleet managers are of a level the like of which we have not seen before. These are troubling, but also exciting times.”

And, with company car benefit-in-kind tax rates beyond 2020/21 yet to be announced and increases taking effect over the intervening period, he speculated: “Is the government on a mission to tax the company car out of existence. I hope not, but at the moment I don’t know.”

Hollick said: “The ICFM is incredibly well placed to support this changing climate - we will always adapt to ensure our members and students are the most equipped, most specialised and most informed from whatever area they come from.

“Skills will change. Manual tasks will cease to exist in their current form and our creative sides will come to the fore. The ICFM is ready. As a progressive organisation, we will adapt training courses to suit the future.”

Now in its 26th year, the goals of the ICFM had not changed, said Hollick: “We continue to focus on our vision. To become the qualification required to be a fleet decision-maker.

“The de facto stamp of approval that you can do the job and to make fleet management a fully recognised vocation. Employers then search out this qualification when employing a new fleet manager just like they would do for an accountant, an architect or a lawyer.”

Membership of ICFM has grown more than 9% in the past 12 months to almost 900 people and it is also training more employees than ever before, including staff from the leasing sector, motor manufacturers and franchise dealerships, as well employees with fleet responsibility working in company procurement, HR, finance and travel departments.

Hollick concluded: “The ICFM is strong and robust, our focus is always on supporting the industry with its significantly changing landscape. We will continue our work while demand and need is there. I’m pleased to report it has never been stronger.”

Peter Eldridge, director of the ICFM, highlighted Government policy changes that would help fleets increase their uptake of low-emission vehicles.