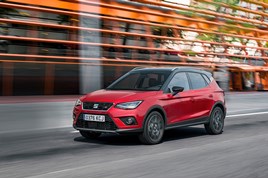 The UK true fleet market grew for the first time in 13 months in April, rising year-on-year by 6.3%, figures from Dataforce show.

The growth was part of an overall improvement in the total market, which grew 10.4% to reach almost 168,000 registrations.

Ford and Vauxhall were once again back to alternating the monthly top spot with the Blue Oval brand taking the podium finish this month.

The next three challengers in the ranking were Mercedes-Benz (third), Volkswagen (fourth) and Audi (fifth).

Volkswagen leapfrogged Audi in terms of last year’s ranking and was the first of the three double-digit growth brands with a 33.3% rise.

Seat in ninth had the highest growth of 49.6% thanks to the Leon and Arona with the compact car more than doubling last year’s April registrations.

Peugeot took the last spot in the top 10, moving up from 11th position last year.

SUV continued to be the fastest-growing segment in true fleet, with 96 different SUVs having at least one registration in the sector in April.

Nineteen of those were new SUV entries that had no registrations in April 2017.

The Mitsubishi Eclipse Cross, the Peugeot 5008 and the Seat Arona were all released late in 2017 but have now all managed to accumulate four-digit numbers in fleet registrations.

The similar sized models of Citroën C3 Aircross, Hyundai Kona and Kia Stonic are all set to battle it out in 2018.

The C3 currently leads this grouping and is ranked 37th for all fleet SUVs’ year-to-date but Kona and Stonic are not far behind.

The UK’s true fleet market fell 11% last month - the first January since 2012 it hasn't seen growth, according to Dataforce.

Skoda achieved a record 3.9% share of the true fleet market in the first quarter of the year, up 0.3 percentage points on the same period in 2017.