Saturday billed as most dangerous day on UK roads 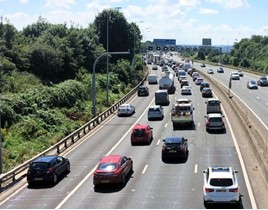 Saturday, July 21, at 2.30pm is the time you are most likely to have a crash in Britain this year, according to new research by road safety company Smart Witness.

Billed as ‘Black Saturday’, Smart Witness says that it is a 'perfect storm', with peak traffic volumes, the start of children's school holidays and the great summer 'getaway’ all playing their part.

More vehicle collisions occur in the summer months of July and August – 2,330 serious and fatal collisions in July and 2,148 in August. This compares with only 1,578 in January and 1,544 in February - the safest months of the year.

Despite the fact that winter months generally bring more difficult driving conditions like icy roads and poor visibility, there are 27.5% more road accidents in the summer - 33,312 in July and August, compared with the winter 26,122 (January and February).

This increase is due to the greater number of motorists on the roads, with the vast majority of families choosing to take their summer holidays at this time. Accidents rise sharply during June and July, hitting a peak at the end of July.

Saturdays are the worst day for crashes during the summer when car drivers are nearly twice as likely (1.7 times) to be distracted or impaired in their driving compared to weekdays. The busiest time on the roads will be at 2.30pm when the 'great escape' is in full flow.

“It will be first day of the summer holidays for many families and there will be extremely large numbers of motorists taking to the roads. Cars will be packed full of children and luggage, which means that drivers will be more stressed and distracted than usual, as they make their way to airports and holiday destinations.

"As a result, this day is expected to have the highest number of incidents for the whole of the year with our data showing that 2.30pm will be the busiest time."

A new project is under way to test how a changeable system of kerbside markings could prepare the UK’s road network for the future needs of connected and autonomous vehicles (CAVs).

The start of the summer school holidays is expected to generate more than 9 million additional journeys by car between Friday and Sunday.