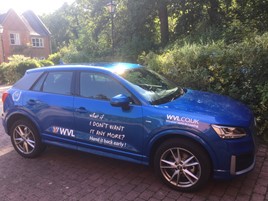 Windsor Vehicle Leasing (WVL) has removed early termination fees after six months for its new contract hire product after it said customers were demanding more flexibility in the wake of Brexit.

Hand it Back Early is available on two- or three-year contracts on new, nearly new and used vehicles, with a minimum of 10,000 miles per annum based on full maintenance contract hire.

The scheme will work on six monthly intervals, allowing customers to hand back the vehicle with no termination fees at six, 12, 18, 24 and 30 months.

“We’re a smaller company so we’re never going to be at the front of the queue on price but we can be when it comes to service and innovation.

“I think the market is really starting to demand this. You’ve seen the property market change from 25 year leases to 10 years and businesses need to be able to adjust to the market.

“We just knew that if, as a lessee, you had the opportunity to hand the car back in six month increments, you would jump at the chance to get that kind of flexibility.”

Newton said that when a business takes on a team of 20 sales executives and provides vehicles through contract hire, it is unrealistic to expect that customer to take all the risk.

He said: “We wanted to offer something that means companies do have the option to adjust their fleet size if their business needs change.”

Newton acknowledges that this new offer does proportion some of the risk back to WVL, but he said this would be managed by choosing the right vehicles and having options for disposal should vehicles come back early.

He said: “We’re going to keep some control over the types of vehicles that will be offered. They have to be sensible vehicles, like a BMW 3 Series or Ford Transit, rather than, say, 20 Ferraris.

“We’re at the early days in the first month of this, but we’re not expecting a large percentage of cars to be handed back. For those that do, we are lucky that a churn of vehicles can be an opportunity for us. We rarely use auctions for disposal.”

The options include re-leasing the car to a new customer, adding the vehicle to WVL’s short-term lease fleet or retailing the car at its Clarence Road used car dealership in Windsor.

The current list of Hand it Back Early vehicles offers a varied range of make, including fleet staples like the Ford Transit, BMW 1 Series and Audi A3, as well as more niche products like the Tesla Model S and Kia Niro PHEV.

Newton said the reaction from customers has been positive, as would be expected. He also said that if a customer had taken out a contract before the new Hand it Back Early scheme was introduced, WVL would be open to dialogue and “wouldn’t rule anything out” if they wanted to switch.

Newton said WVL saw small growth last year, with a risk fleet “in the four figures” and that the company is a boutique business with the majority of its customers being small- to medium sized enterprises (SMEs).

He is expecting Hand it Back Early to help lift the business this year against what he describes as a “tough market”.

He concluded: “The biggest challenge for the next 12 months is to retain our customers and win new ones with innovative ideas.

“There is certainly a supply issue, too, with a lot of manufacturers shutting down on volume, so we’re managing waiting times, with some going up to six months.

“I started in sales and was always taught never to build an offer on price. However, with the big players in the market, automotive has become commoditised.

“We’re of the opinion that you need to take as much care choosing your vehicle supplier as you do with your auditor or security.

“I think we’re at the stage where there has to be this flexibility.

“If this takes off, everyone is going to have to start doing it. It think it is just an evolution of contract hire.”

Is it more cost effective to terminate a vehicle's contract early or should you consider reallocating it within your fleet?

Don’t be a loser when it comes to excess mileage and early-termination charges – our FAQs will make you a winner, says Andrew Ryan