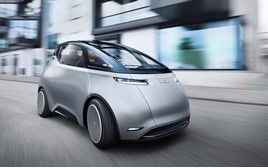 Swedish car manufacturer Uniti has chosen to manufacture its new electric city car in the UK. The announcement came just as Wiltshire-based Dyson said its plug-in car will be built in Singapore.

Uniti will have a pilot production facility at Silverstone near the home of UK Formula One to build its One two-seater model with the first units ready by 2020 and expected to be priced at around £13,000. Sales will be direct through Uniti rather than a traditional dealer network, with the small electric city car a potential pool car for employers keen to cut emissions.

Lewis Horne, Uniti chief executive, said the UK was chosen due to the expertise available on carbon vehicle production and its position as a key market for future sales.

He told Fleet News: “It’s no secret that some of the world’s best vehicle engineers are clustered around Silverstone. When coupled with a Government receptive to our ambition and goals, we couldn’t find a better home to establish our pilot production facility.”

Uniti has already employed a team of engineers at a research and development centre in Northamptonshire and has partnerships in place with KW Special Projects (lightweight structure and additive manufacturing), Danecca (EV powertrains), Unipart (global supply chain) and Siemens (manufacturing software). Uniti has also set up an office in London to manage its UK operations.

Uniti plans to unveil its production models late next year and deliver vehicles to pre-order customers throughout northern Europe shortly after. The One is yet to pass crash safety tests, but it will undergo this process before launch.

Horne’s plan is to use the UK production site as a template for manufacturing in other countries to help ramp up production to around 50,000 units a year. If Uniti can prove its concept with the One, there will be four- and five-seat models in the future.

The One city car has a potential range of between 93 and 180 miles (dependent on whether fitted with a 15kWh or 24kWh lithium ion battery) and a top speed of 80mph.

The vehicle will be aimed at commuters who often travel short distances at low speeds. The seating position set-up is similar to a Renault Twizy, with the driver sitting in the centre and a small passenger seat positioned directly behind.

Horne said: “Numerous studies also show that, despite the benefits of emissions-free mobility, modern electric cars are only fractionally more sustainable than their fossil fuel counterparts – when their entire lifecycle impacts are considered.

“This disparity in sustainability performance is mainly due to the incredibly complex manufacturing process that cars today demand; with their large steel bodies that were designed for the engineering challenges of the internal combustion engine.”

Horne says Uniti will differ from other EVs in that it will be made from composite materials that can be optimised for sustainability while still passing or exceeding the safety and mechanical standards of heavy, steel framed vehicles.

He continued: “We intend to manufacture these vehicles in fully automated facilities and will deliver them to the mass market.”

Uniti’s decision to build EVs in the UK is in contrast to Dyson, which has also revealed that it will start building vehicles, but has chosen Singapore as a base.

Dyson, famous for its vacuum cleaners, is investing £2.5 billion in its EV project and is expecting to have a model available by 2021. The company has already invested £200m in a research and test track facility with a team of 400 at Hullavington Airfield in Wiltshire and will expand this to add motorway, off-road and high-speed testing facilities.

The company has operations all over the world and the decision to base production for the EV in Singapore was influenced by the fact it already has a factory there that makes the motors for its other products. It will also act as a gateway to the lucrative Chinese automotive market.

While the first EV from Dyson is due in 2021, concrete details about what will power it, the range it will have and what segment it will be in have not been given due to the company’s secretive approach to giving detail on products in development. However, it is rumoured there will be a three-car line-up in the future and Dyson will be targeting the premium end of the market at relatively low volumes.

So far this year, it has bought more than 2,000 hybrid and plug-in vehicles, which is twice the number acquired in all of 2017.

The City of London Corporation has won a prestigious prize in recognition of its work on green and safe transport initiatives.

Hyundai’s Kona Electric achieved a ‘real-world’ range of 259 miles on a single charge during a What Car? Real Range test – the highest of any vehicle tested.