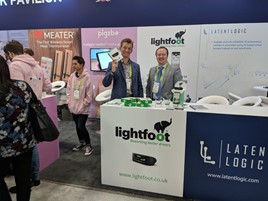 Lightfoot is flying the flag for UK fleet technology with its fleet and consumer driver reward device at CES 2019.

Exhibiting at the Great Britain and Northern Ireland Pavilion, Lightfoot has been invited to demonstrate its driver behaviour and rewards technology to an international audience of over 180,000.

Its technology is an in-vehicle device, which helps fleets and motorists across the UK make fuel savings and reductions in emissions of up to 20% - as well as reductions in at-fault accidents by as much as 40% - aims to reduce carbon emissions on a global scale.

Lightfoot’s head of innovation Dan Regan said: “Having a presence at CES is huge for Lightfoot.  It’s raising our profile with tens of thousands of influential businesses from around the world.”

Lightfoot’s chief executive and founder Mark Roberts said: “We are ecstatic to be exhibiting at CES 2019. This is the kind of platform we dreamed of having back in our infancy and to be exhibiting our technology to such a huge crowd, including some of the biggest names in tech, feels like a real landmark moment for us.”

“2018 was an incredible year. The company secured nearly £5m in funding from Innovate UK and the Business Growth Fund in two separate deals, and welcomed Martin McCourt, the former CEO of Dyson, to the board as non-executive Chairman. Moving into the consumer market and starting the year at CES is a sign of things to come – we are confident 2019 will bring with it even greater growth.”

Break aims to cut fuel costs by 15% with Lightfoot telematics

East Anglian children’s charity Break is anticipating making fuel savings of 10-15% after fitting Lightfoot telematics to its fleet of 30 vehicles.

Lightfoot has announced the appointment of a new relationships manager, marking a 100% headcount increase over the past 12 months.