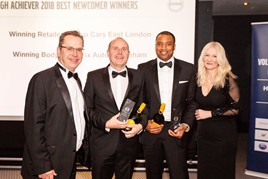 After collecting the award during a ceremony held at the Aviator Hotel in Farnborough, commercial director Paul Cunningham said: “Joining Volvo’s repair programme a year ago was our first step in achieving vehicle manufacturer approvals. Being named as Volvo’s Best Newcomer is a great achievement and is a result of the fantastic work by the entire team.

“During the presentation the team at Volvo commented on how our success was down to the fact that we hit the ground running immediately when we joined the repair programme.

“In addition, they said we had delivered a class-winning customer experience and repair service level. To hear that from such a highly respected organisation is exceptional. I can’t thank the team at East London Volvo for their continued support which has ensured this success.”

The Volvo award takes the number of awards listed on Fix Auto Dagenham’s website to an impressive 36 since 2004. I

n 2018 alone, the repairer received four by being named British Bodyshop Awards’ Gallagher Basset Customer Service Award for the second successive year. Fix Auto Dagenham also achieved regional success by winning the Barking and Dagenham Business Awards Customer Service award as well as the Training and Development Award, and Cunningham was named as the Business Person of the Year.

“The Best Newcomer category was introduced to recognise a bodyshop and their nominating retailer who were new to our Body and Paint programme during 2018.

“Fix Auto Dagenham were committed to the programme’s objectives straight away, they have embraced the programme from day one, making them a very worthy appointment and winner. We are delighted to have the team from Dagenham supporting us. Keep up the fantastic work that you are doing”.

He added: “Fix Auto Dagenham know just how important it is when it comes to working closely on a local level to help develop Volvo customer retention with their local retailer. Their close working relationship will remain a core programme value as we continue to positively move forward.”

Fix Auto UK’s Ian Pugh said he was “extremely proud” of the Fix Auto Dagenham team for their latest achievement.

He added: “Owner Chris Oliver has created a fantastic team of passionate individuals who constantly strive to outperform and deliver the very best service. Congratulations to all of the team.”

Fix Auto Malvern has become the latest franchisee in the network to expand and open a Fix & Go express repair facility.