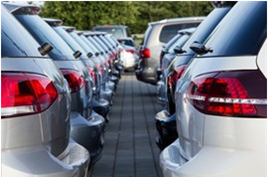 Overall, UK car registrations were 3.4% down in the month, with the only growth coming from the rental sector.

Analysis from Dataforce shows that Volkswagen delivered the strongest true fleet performance, despite posting a 1% decline in true fleet sales in March.

Mercedes and BMW followed, both with strong performances of + 7.2% and + 13.2% respectively

Vauxhall appears to be bearing the brunt of the downturn for the month, not only dropping six places into seventh but also with the highest decrease of 55.2%. Despite this, registrations for the Grandland X tripled.

The top three electric cars in the true fleet marker were the Nissan Leaf, BMW i3 and the Jaguar I‑Pace.

While diesel posted a double-digit deduction of 21.9%, Dataforce says there may be some positive results coming soon. The first RDE2 compliant cars will arrive in the UK this month, meaning that company car drivers can avoid the higher BIK (Benefit-in-Kind) band for Diesel cars which meet these stricter emission standards.

“It remains to be seen whether this will help to put the brakes on the diesel decline but it is certainly good news for end users who can now remove the arbitrary penalty the Government had applied without outlining the standard required for RDE2 compliant cars,” said Richard Worrow from Dataforce.