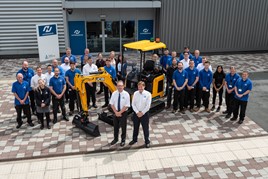 Hyve - a factory with the capacity to produce up to 30,000 vehicle and energy storage battery packs each year – opened in Sunderland today.

The site is home to lithium-ion battery technology developer and manufacturer Hyperdrive Innovation, which has invested £7 million into its manufacturing capabilities since moving to the site in 2014.

Chris Pennison, CEO of Hyperdrive, said: “We’re working with some of the most forward-thinking and innovative organisations in the world as their trusted electrification and energy storage partner.

“Hyve enables us to deliver a high-quality product, providing our customers with the right energy at the right time.”

Hyperdrive manufactured its 5,000th pack manufactured at its site, with Hyve expecting to produce up to 10,000 packs 2019 in alone.

Customers of Hyperdrive include a major online grocery retailer and a multinational power management company, while it has signed a supply deal with JCB to power its first electric excavator.

Hyperdrive moved to the Future Technology Centre (FTC) in Washington, Sunderland, in 2014.

Advice and support from the local authority also enabled Hyperdrive to secure the 21,000 sq. ft HYVE facility, also at the FTC.

Support from the Advanced Propulsion Centre (APC) played an integral role in the early stages of Hyperdrive’s seven-year history.

The High Energy Density Battery Project (HEDB), in partnership with Nissan and funded by a £9.7m APC grant, enabled Hyperdrive’s latest battery technology to be brought to market.

Hyperdrive last year completed a major £40m deal with manufacturing giant Foxlink Group, which means the Taiwanese company can use Hyperdrive’s intellectual property to produce and sell its modular battery pack across Asia.

Sales of battery electric vehicles are increasing rapidly in the UK, but manufacturers say they cannot meet demand, often citing battery shortages as the problem.

Earlier this year, Hyperdrive celebrated the significant achievement of the 5000th pack manufactured at its site. Hyperdrive’s HYVE, the UK’s leading independent battery manufacturing facility, expects to produce up to 10,000 packs 2019 in alone.

Sales of electric vehicles are being constrained by battery supply. We look at why this is and what the future holds