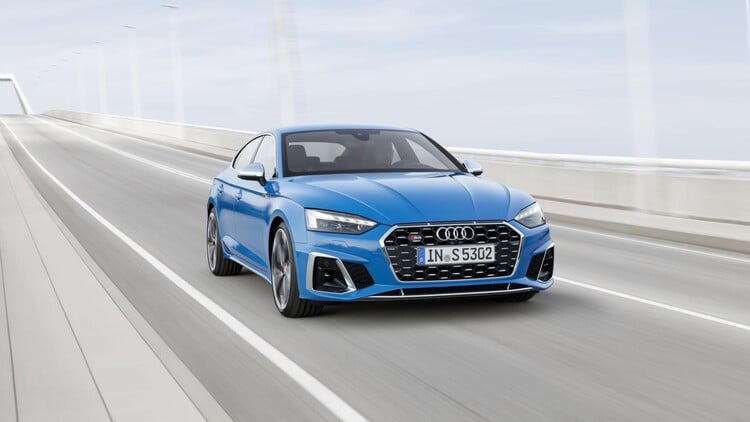 Audi has revealed the new A5 Coupe, Sportback and Cabriolet, featuring a new range of more efficient engines and new infotainment.

The facelift follows the updates recently applied to the Audi A4 saloon and avant.

A range of TFSI and TDI engines with outputs ranging from 163PS to 347PS will be offered. All engines satisfy the limits of the Euro 6d-temp emissions standard.

As with the A4, the high-performance S version will use a V6 diesel engine.

At market introduction, four A5 engine variants will be equipped with a mild hybrid system (MHEV). With the four-cylinder engines, the MHEV system is integrated into the 12-volt electrical system, while the S TDI models use a new 48-volt main electrical system.

In the S5 TDI, for example, Audi measurements indicate that this electrification can reduce fuel consumption in everyday operation by up to 0.4 litres per 62 miles by means of recuperation or shutting down the engine when the driver lifts off of the accelerator.

The start-stop range also now begins at speeds of 13mph and below, contributing to these savings, while restarts are quicker and smoother.

All A5 models are equipped with an automatic transmission, either a seven-speed S tronic or an eight-speed tiptronic. The three most powerful engines in the range work with Quattro drive as standard and the system is also available as an option for the mid-range units.

The MMI navigation plus infotainment control centre will be a standard feature of all A5 models, using a 10.1-inch screen.

Audi virtual cockpit plus is another standard feature of the latest A5 models. The driver can operate the 12.3-inch display with full HD resolution using the multifunction steering wheel with a choice of three views. A head-up display that projects important information into the driver’s direct field of view is also optionally available.

The new Audi A5 range will be available to order before the end of the year, with deliveries taking place in Spring 2020.

New A4 is expected to offer attractive company car tax, thanks to new mild-hybrid 2.0 TDI engine.

Audi has revealed the new Q3 Sportback, a sportier “coupe” version of its exisiting Q3 SUV.

Audi is now accepting orders for the e-tron 50, a cheaper version with a smaller battery pack and reduced range.