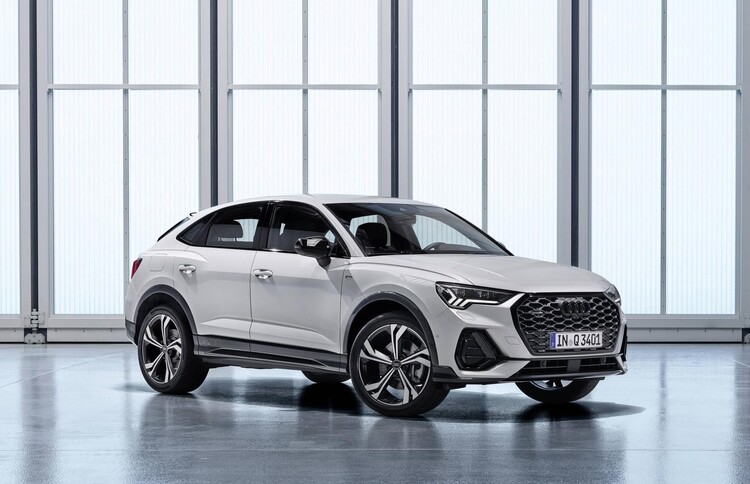 Audi has revealed the new Q3 Sportback, a sportier “coupe” version of its exisiting Q3 SUV.

The new model will be available to order in August, with first deliveries commencing in Autumn.

It has roughly the same footprint as the Q3, albeit with a 49mm lower roofline.

The raked rear end cuts into available luggage space, although Audi quotes the same boot volume of 530 litres (up to rear seat height) as the Q3.

Audi says the Audi Q3 Sportback is a car for customers “who value expressive design as highly as technical innovation and dynamic aptitude.”

Edition 1 and Vorsprung models go a step further by upsizing to a 20-inch wheel and adding a black styling pack colouring elements such as the grille surround and window cappings.

Audi’s top-of-the-line MMI navigation plus system is standard for all UK Q3 Sportback models. The various functions are displayed on the MMI Touch display and in the Audi virtual cockpit with its 10.25-inch screen in the instrument binnacle.

In the first launch phase two engines will power the new Audi Q3 Sportback - one TFSI and one TDI - both of which have been certified to the Euro 6d-Temp emission standard.

A 1.5-litre TFSI engine will follow in the Audi Q3 Sportback 35 TFSI. It provides 150PS and is aided by cylinder-on-demand technology, which at low and medium loads deactivates the second and third cylinders to reduce consumption. The engine also features a 48v mild-hybrid system.

Prices and emissions data are expected to be announced next month.

Carmaker may have lost ground over WLTP, but 10-year lithium deal could provide welcome turning point

The benefits of electric drive extend beyond silent running and cheap energy, and include lower taxation

New A4 is expected to offer attractive company car tax, thanks to new mild-hybrid 2.0 TDI engine.