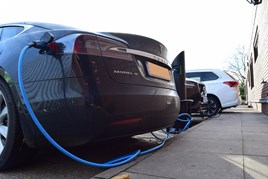 ALD Automotive is seeking to reset how fleets look at total cost of ownership for electric vehicles (EVs) with a new funding model that will see vehicles leased to second and third drivers after the first fleet customer.

Keeping the EV for much longer reduces the risk of reduced residual value (RV) for an EV, as it is only when the leasing company disposes of it that any profit or loss is realised.

Matt Dale, ALD Automotive head of consultancy, said this would bring the rental cost closer to price parity with internal combustion engines (ICEs) and it will mean more consistency in rental prices as the company takes a longer term view on RV risk.

This new approach to risk on EVs by ALD will roll out in the next six months and is driven by “a much more optimistic view” on areas like RV and service, maintenance and repair (SMR) costs.

ALD will be focusing on pure EVs with a range of more than 180 miles. Electric vans will also be included in the project.

Dale said: “This technology doesn’t scare ALD Automotive. You either jump on board with the EV revolution or you risk being static and continuing to lease diesels and you’ll struggle in the future.”

Dale said historic funding models based on ICEs are governed by the age and mileage of the vehicle and the impact that has on the cost of maintenance.

Given there are fewer moving parts with EVs, Dale said they are not going to depreciate in the same way.

ALD’s approach will be to offer business contract hire to the first EV user and then it is likely to focus on PCH customers for the second and third lessee, rather than remarketing that vehicle via auction or used car retail.

ALD will refurbish vehicles and inspect the battery as part of its new plan to “realise the full potential of the asset and unlock access to EVs for more customers”.

Dale said part of what has been holding back EV sales is a “fear factor” from the traditional valuation guides on RVs.

He said: “The question for EVs is can we manage the risk in a different way? Most vehicle batteries come with a five-year warranty, but this technology is lasting much longer than vehicle manufacturers first thought.

“That battery life and mileage capacity isn’t dropping off, there might be some degradation, but we’re talking from 100% to 80%, rather than an EV stopping dead after 10 years.”

The 0% benefit-in-kind (BIK) tax on EVs for 2020/21 is expected to boost fleet uptake and other companies are looking at what they can do to capitalise.

FCA Group is looking to offer flexible leases that don’t feature early termination charges for those that switch to its new plug-in products.

LeasePlan UK is offering flexible three-month leases on electric vans so customers can have more operational time with the product. The scheme is being considered for cars too, but this is dependent on supply.

Valuation guides Cap HPI and Glass’s both reject suggestions they have been overly pessimistic regarding the EV market.

Andrew Mee, head of forecast UK at Cap HPI, said the company’s approach has matured over time. He said that in every sector review since the start of 2017, Cap HPI’s forecast values for EVs have increased and are on average now around 20% higher (see chart above).

Mee said: “The used EV market has moved on for a variety of reasons, from improved buyer perception due to significant steps forward in battery performance and investment in charging infrastructure, to improved remarketing strategies.”

New EV models with higher ranges, shorter charge times and lower list prices, coupled with the Government’s 0% BIK announcement will further increase volumes, both in the fleet and, eventually, the used market.

Robert Redman, forecast editor at Glass’s, said lower SMR costs are only one factor in calculating the RV, with the slow private uptake of EVs being by far the most influential factor currently.

Further factors that Glass’s is monitoring are the advantages of the next generation of EVs.

These vehicles have greater ranges and faster charge times and could put pressure on EVs currently in the used market as next-generation models become more prevalent.

Redman said: “If a leasing company decides it is going to re-lease the vehicle a second and a third time then it can be more optimistic with the first and second forecast value as it will not be selling the vehicle on at that moment in time.”

Redman feels ALD’s approach appears to be a sensible foray into EV leasing.

He said: “It is a practical way of ramping-up volumes of these vehicles while minimising asset risk.

“With changes in BIK rates for company car drivers recently announced by the Government, which reduces the rate to zero, we should expect to see EV take-up increase rapidly.”

Rupert Pontin, Cazana director of insight, said that used retail pricing for EVs has been improving markedly in the past year and used vehicle market volumes, while still low, have also been increasing, but not in line with demand.

He said: “This picture must give confidence to the RV setters, as long as they have a data supplier that provides unbiased fact rather than subjective figures.

“A more positive view on forecasted values for EVs is not just necessary but actually essential.

“The only caveat is the speed at which technology advances. As newer models hit the market with better range and more advanced interiors, older cars will become less popular with buyers more quickly, and their retail pricing will drop.”

ALD Automotive has launched its ALD Carmarket digital platform to give dealers access to its defleeted lease vehicles.