The decline in diesel new car sales continued in 2019, with 21.8% fewer diesels sold following a fall of almost 30% in 2018, according to new figures from the Society of Motor Manufacturers and Traders (SMMT).

There was modest growth in demand for petrol cars, up 2.2%. However, this was not enough to offset the significant decline in diesel registrations.

December marked the 33rd month of diesel decline, with SMMT blaming the continued anti-diesel rhetoric and confusion over clean air zones hit demand. This has resulted in drivers keeping their older, more polluting vehicles on the road for longer, holding back progress towards environmental goals.

In terms of fleet and business registrations, market share remained static – 55.9% in 2019 compared to 55.6% the previous year.

During December, fleet and business registrations actual registered a positive performance compared to December 2018, with 94,183 units registered – a 5.4% increase.

Looking at the market as a whole, demand fell across nearly all vehicle segments, with only the dual purpose and specialist sports categories experiencing growth, up 12% and 19.2% respectively.

Despite registrations of superminis and lower medium cars falling (by 6% and 4% respectively), these smaller vehicles remain the most popular – with a combined 57.1% market share.

SMMT chief executive Mike Hawes said: “A third year of decline for the UK new car market is a significant concern for industry and the wider economy.

“Political and economic uncertainty, and confusing messages on clean air zones have taken their toll on buyer confidence, with demand for new cars at a six-year low.

While the huge increase in BEV demand is welcome, says the SMMT, their 1.6% market share is still tiny and underlines the progress needed to reach the 50-70% share the government envisages in the next 10 years. This ambition has not been helped by the significant decline of zero emission-capable plug-in hybrids, down 17.8% – further evidence of the consequences of prematurely removing upfront purchase incentives before the market is ready.

Massive investment by manufacturers into advanced powertrains, lightweight materials and aerodynamics means new cars are ever more efficient, with new cars emitting, on average, some 29.3% less CO2 than models produced in 2000.

However, this could not offset the overall rise which was due primarily to the effect of the more stringent WLTP test of new models, which generally ascribes a higher CO2 value than the older NEDC test to the same model, as well as some segment shifts and the decline in diesel.

Hawes said: “We urgently need more supportive policies: investment in infrastructure; broader measures to encourage uptake of the latest, low and zero emission cars; and long term purchase incentives to put the UK at the forefront of this technological shift. Industry is playing its part with a raft of exciting new models in 2020 and compelling offers but consumers will only respond if economic confidence is strong and the technology affordable.”

Despite the overall decline in 2019, the UK car market remains the second biggest in the EU, behind Germany. It is also one of the most diverse, with buyers able to choose from some 350 different models available in various fuel types and body styles to suit all driving needs.

With nearly 90 new generation models – 23 of them zero emission cars and 11 plug-in hybrids – set to make their showroom debuts in 2020, and some compelling deals on offer, the industry is committed to new technology that will benefit consumers and the broader environment, says the SMMT.

Justin Benson, head of automotive at KPMG in the UK, said: “The latest car registration numbers are disappointing, having dropped by over 2% on the previous year, however, the focus this year is all about consumer confidence and electric vehicles.

“Over the next couple of months we will see if consumer confidence improves, with increased certainty around the economy. I believe that 2020 will also be the year the industry sees sales of electric vehicles double again.

“Although still a low base, new emissions regulations and increased consumer awareness around climate change will drive continued growth in battery electric vehicles.”

Jon Lawes, managing director of Hitachi Capital Vehicle Solutions, added: “The decline in overall car registrations to reach a six-year low makes for concerning reading; although amid the political and economic uncertainty, a stall in growth in 2019 will have been expected.

“However, the strong growth in electric vehicle registrations throughout 2019 will provide the industry with cautious optimism for the year ahead.

"The record market share for electric vehicle registrations can largely be attributed to changing consumer patterns and increasing levels of confidence in the range of options provided by electric vehicle manufacturers. This is supported by our recent research, which found that 62% of consumers support the transition towards electric vehicles.

“That being said, alternatively fuelled vehicles (AFVs) accounted for only 7.4% of total car registrations in 2019 as CO2 levels rose for the third consecutive year. In order to achieve further growth, the industry and Government must address key issues such as charging infrastructure and financial incentives to power the transition to AFVs.”

The UK's new car market in 2020 is forecast by GlobalData to see another drop of around 5% to 2.2 million units.

David Leggett, automotive editor at GlobalData, said: "The UK's planned formal departure from the EU at the end of January and the transition arrangements for UK-EU trade (effectively, business as usual) may have removed some short-term uncertainty, but the UK Government is aiming to conclude a new trade deal with the EU by the end of the year.

"It will be a very big challenge to get a comprehensive UK-EU trade deal in place for the end of the year. If it is not, a 'no-deal' on permanent trade arrangements between the UK and EU is a scenario that could see new import tariffs on car parts and finished vehicles as well as disruption to cross-border shipments (which means higher costs incurred by vehicle manufacturers).

"Once again, investment flows to UK Automotive could seize up and consumers will be nervous about economic prospects.

"In addition, currency volatilities also pose an ongoing concern, especially for importers who have seen margins eroded by sterling weakness. And the outlook for the UK economy is for another year of modest GDP growth - not much more than 1%. It's hard to see the UK car market picking up against that background."

"According to the SMMT’s most recent new car CO2 reports, the average CO2 emissions figure for new cars has been rising, which could be an unintended consequence of the push against diesel but will also include the impact of the change in test cycle, with some manufacturers seeing an increase in quoted emissions of 20%.

"It will be interesting to see whether this trend has continued when the next edition of the report is published.

"Many of the very latest diesel vehicles emit lower levels of greenhouse gases than their petrol counterparts, and should therefore be factored in when drivers are choosing the most suitable vehicle for their needs.

“The percentage increase in BEV registrations should also be interpreted with care – while we’re undoubtedly heading in the right direction, it’s from a very small base.

"The 37,850 BEVs registered in 2019 represent just 1.6% of the total new cars on the roads. This is why we still need to see compelling fiscal support and on-road perks in 2020, to reduce the upfront and in-life cost of a BEV, and to increase the rate of adoption in line with the country’s Road to Zero targets.

"We look forward to the next Budget and are hopeful that the zero per cent BIK rate for EVs will be enshrined in legislation for an extended period, so that company car fleets can lead by example.” 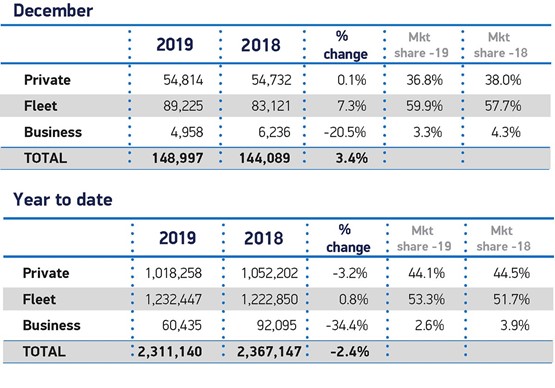 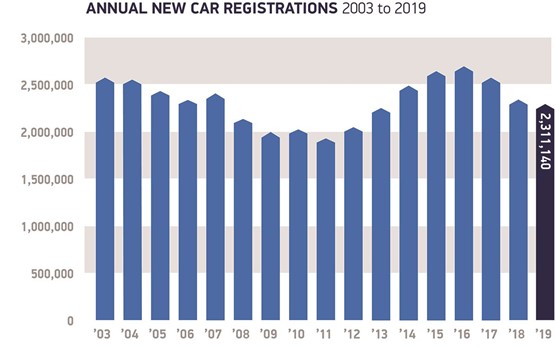 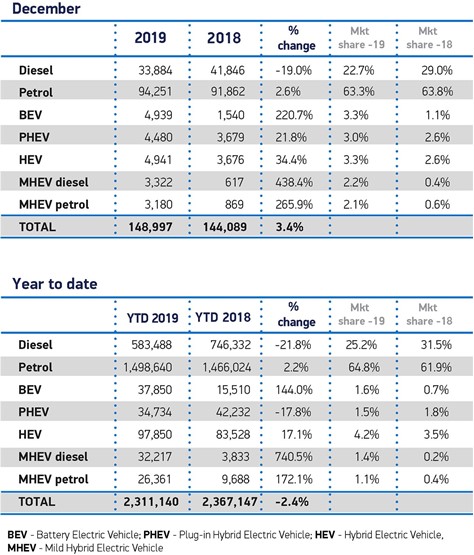 A diesel ban has moved a step closer in Bristol after the cabinet approved the plan yesterday (Tuesday, November 5).

‘Make or break’ year for diesel amid Government policy ‘shambles’