A diesel ban has moved a step closer in Bristol after the cabinet approved the plan yesterday (Tuesday, November 5).

The local authority is proposing a diesel vehicle ban combined with a clean air zone charge as part of a “bold approach” to tackle air quality.

The proposal would see all diesel vehicles banned from a small area in the city centre and a larger charging zone for older, less efficient commercial vehicles such as buses and taxis.

Private cars would be included in the small area ban, but would not face charges.

A scrappage scheme for older diesel vehicles would also be launched.

If they are accepted by government, the changes will be introduced in March 2021.

Nigel Base, commercial vehicle manager at the Society of Motor Manufacturers and Traders (SMMT), said: “We want to see all cities, including Bristol, meet their targets and continue to invest in ever more advanced technology to help improve our environment.

"However, this proposed blanket ban, which goes against government’s guidelines, fails to distinguish between modern vehicles and decades-old technologies and will only cause confusion for drivers while also undermining efforts to boost air quality.

“The automotive industry is committed to a low carbon future, and is investing massively to get there. Average CO2 emissions from new cars have declined by around a third since 2000, and the development of the latest low emission technology has resulted in new vehicles that have vastly reduced NOx and virtually eliminated particulates.

“Instead of the proposed ban, we need a clear and consistent national approach to clean air zones that incentivises uptake of the latest, low emission vehicles, including new Euro 6 diesels, which are the cleanest ever produced, alongside improvements to traffic flow and investment in charging infrastructure.” 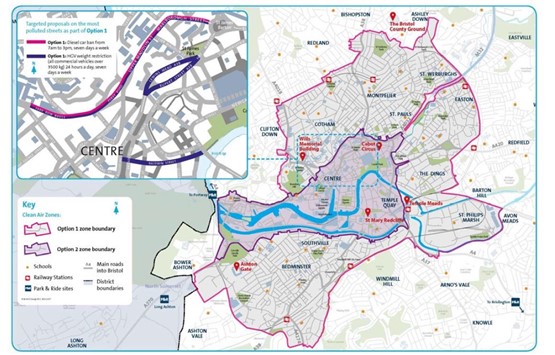 Bristol City Council’s website states that detailed implementation information will be developed as part of the process of producing the Full Business Case (FBC) which is required to be submitted to JAQU in February 2020.

Further consultation will take place in relation to the detail of the implementation of the preferred option. A public consultation programme was run from July 1, 2019, to August 12, 2019. A total 5,034 consultation responses were received.

Thomas Newby, chief operating officer at renewable energy company, Tonik Energy, said: “Bristol is setting a nationwide standard of change and it’s one that cannot come soon enough for its most at-risk residents.

"The city is a pioneer on the UK’s mission to bring air pollution levels down, bravely going one-step further than London’s clean air zone policy. This has set a precedent for cities across the UK and collaborative action is now needed to ensure this plan does not fall victim to policy paralysis.

“The UK’s net zero emissions target may be sizeable, but it’s not impossible. Any pledge to reduce greenhouse gas emissions is a step in the right direction; but true change - particularly one that is set out to tackle toxic transport systems - requires imagination and action beyond what we have already seen.

"As electric vehicles become the new normal - as we expect to see in Bristol - there will be increasing pressure on private and public sector stakeholders to ensure the infrastructure is in place to support the boom in clean, green motoring.

"An assumption that existing electrical connections, for example, are suitable for significant increases in power demand from electric vehicles, is likely short sighted.”

Bristol City Council has launched a public consultation to establish which air quality measures it will introduce.

Fleets operating within Bristol may be forced to change their vehicles if the city’s Clean Air Zone (CAZ) proposals are introduced.