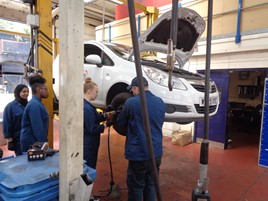 The announcement comes days after the company revealed that its chief executive officer (CEO), Henry Brace, was leaving the business.

Rivus Fleet Solutions managing director, Dr Magnus Zuther, told Fleet News: “Whilst it has been a hard decision to close the garages, we are confident this is the right decision to take our business forward. We will work closely with our customers to minimise any impact.

“Employees at the sites in question are being consulted on potential redundancies. “We are working with our people to identify alternative employment, where possible.”

The new owners told Fleet News in the wake of the sale that it had ambitious plans for the fleet management company. This, it said, was likely to involve further acquisitions, investment into the organisation’s existing services and the introduction of new services.

Headquartered in Solihull, the business which was established in 2002. It was rebranded Rivus Fleet Solutions in October 2019, but retains a “long-term” contract to continue as exclusive fleet services provider to BT’s 35,000 vehicles with service-based incentives to encourage BT to re-sign “down the track”.

It was announced that Brace was leaving the business last week. He had taken over the helm of BT Fleet Solutions in April 2016, having previously held several other roles at the fleet management company.

Rivus Fleet Solutions said that he had decided to step down to “pursue new challenges and opportunities”.

It is currently in the process of recruiting a new CEO. In the interim period the business will be led by the existing executive team, alongside the senior Aurelius operations members, in line with the current business model.

Expanding on the reasons behind the garage closures, Zuther explained: “After thorough analysis following Rivus’ separation from BT, we have identified that 11 of our garages are making a financial loss – and will likely continue to do so given their capacity, location, design and layout.

“Our focus will now be on further enhancing our service offering across our remaining 54 garages to support current customers and anticipated new business.”