Fleets are being urged to stagger vehicle returns to help lessen the impact of coronavirus on used car values, while dealers are being warned not to cut new car prices.

Not since the banking crisis of 2008/09 have the new and used car markets faced such an economic shock.

Back then, it resulted in residual values (RVs) falling 30% in the space of a year and put some leasing companies that lacked financial strength out of business.

Exiting the current economic crisis could take time, with the Glass’s UK editorial team suggesting a 75% probability of a ‘deep recession, slow recovery’ scenario in the UK.

Anthony Machin, head of content and product at Glass’s, said: “Forecasts suggest that UK Government borrowing is likely to reach £180 billion (7% of GDP) in the current 2020/21 financial year. However, to kick-start the economy, it is likely even more Government support will be needed.”

Chancellor Rishi Sunak has also acknowledged that, despite his initial optimistic outlook, an immediate “bounceback” for the economy does not now look obvious, once lockdown restrictions are eased.

Last month, he told the Lords economic affairs committee that figures from countries where restrictions were being lifted, suggested a full recovery could take time.

That will impact purchasing power and private demand, but analysts are not predicating the double-digit falls RVs saw in the last downturn.

In fact, Autovista suggests the UK could fare better than many of its European neighbours, despite a potentially bleaker economic backdrop, exacerbated by Brexit.

By the end of 2022, Autovista is predicting UK used car prices will have fully recovered to levels above those achieved in March, when the lockdown was introduced.

The UK is the only country in Europe, out of the 13 it assessed, where RVs are expected to show an increase on March 2020 values.

It is forecasting an initial 0.4% reduction on values realised in March by December of this year. A year later (December 2021), it expects RVs to be 1.3% down on the same March values, before finally recovering to a positive position in December 2022, 0.9% above pre-pandemic prices.

In comparison, over the next six months, RVs in Spain and Germany are predicted to fall by 5.4% and 2.2% respectively, on values seen in March.

Analysts expect them to recover by December 2022, but still to be below those achieved immediately before the crisis began, with Spain showing a 3.7% fall and Germany a 1.7% reduction on pre-pandemic prices.

France, meanwhile, is expected to see the greatest decline in RVs by December 2022, according to Autovista’s latest data, with a 5.3% fall.

The main reason for the UK’s positive outlook, it says, is the limited elasticity in the market, together with the fact that supply of new cars has drastically reduced and is unlikely to ramp up again soon.

Pricing experts at Cap HPI are also predicting a fall, not a crash, in used car values over the next 12 months, with no significant long-term impact on RVs (see further analysis from Cap HPI's head of forecasting, Andrew Mee).

From the start of the lockdown, Cap HPI said it would analyse both used car retail and wholesale data, but it would not adjust used values while there was insufficient data to portray the market accurately.

As the number of used cars being sold at auction begins to increase, the initial impact of Covid-19 on RVs will become a little clearer, with Cap HPI again starting to adjust pricing data to reflect sold prices.

Early indications from the vehicles that have been sold suggest a 2-5% downward movement on some models. It is worth noting, however, that the previous five years have seen an average drop of 4% during April and May at the five-year-old age point, and last year there was a 6.3% fall.

The movements seen in the middle of this pandemic are, therefore, by no means seismic, says Cap HPI.

“The current economic shock is not paired with a lack of financing opportunity and, after the peak of the crisis, we would hope to see some pent-up demand as private consumers will regard the shock as temporary.”

Pricing data analysts at Indicata, part of the Autorola Group, say Austria and Germany have returned to 80% and 90% respectively, of their pre-lockdown levels of used car sales within just a few weeks, while the Netherlands and Sweden have also seen a spike in activity.

“Denmark has actually seen a 2% rise in used car sales which, hopefully, bodes well for the UK market when it opens for business,” said Jon Mitchell, group sales director at Autorola UK.

Sweden was the most relaxed lockdown country in Europe and has continued to trade at 80% of its usual sales levels during March and April. Dealers there have adjusted prices downwards by 4.4% since February.

“This is the only major price trend we have seen across Europe that gives a feel of how prices are moving. Most lockdown countries haven’t repriced stock yet as they have not been trading,” said Mitchell.

Both Cap HPI and Autovista say the fleet and leasing industry can help mitigate the impact of Covid-19 on RVs.

Cap HPI is urging fleets to stagger vehicle returns into the used market over the next few months to avoid accelerating a fall in used values.

Equally concerning, says Autovista, would be the temptation of dealers to heavily discount models in an effort to drive the new car market.

Autovista says stock had been building up in many markets due to short-term registrations towards the end of last year, in part to avoid those vehicles being accounted for in CO2 emission calculations and resultant fines.

Spring is usually when car dealers do a lot of business, but this has been lost because of the lockdown.

To compensate for their losses, Autovista believes dealers could offer “straightforward” discounts to attract used car buyers to new product.

However, it stresses that this would be a mistake, as it would put downward pressure on vehicle prices – new and used – for the remainder of the year.

Car dealerships opened their doors on  Monday (June 1), while remarketing companies have been selling an increasing number of vehicles online.

BCA says a growing programme of virtual sales are being held daily to cater for buyers who prefer to join live bidding in real-time.

It has continued trading throughout the lockdown, achieving 100.2% of pre-sale valuations during the first weeks of the Covid-19 lockdown in virtual sales held by the vehicle auction company.

Like BCA, Aston Barclay has remained operational, selling vehicles through its digital channels, with an auctioneer and all the support staff safe in their homes.

Sales have been split between fleet and dealer stock and it has sold more than a thousand used cars in the first seven weeks of lockdown.

Neil Hodson, Aston Barclay Group CEO, told Fleet News: “It’s difficult to say if prices will be impacted. It may take until the end of June and into July before we see prices settle down, although if new cars are in short supply, and consumers start to use the money they were going to invest in summer holidays to buy a used car, we may see prices remain strong.”

Manheim, part of Cox Automotive, re-started its auction programme online from May 12, with stock available to buy through ‘buy now’ events and ‘virtual auctions’ via Simulcast.

Philip Nothard, customer insight and strategy director at Cox Automotive, told Fleet News that, although volumes remain low in comparison with normal trading, early indications are there is an “encouraging” appetite for used cars.

Pre-pandemic, Cox Automotive was forecasting 7.99 million used car transactions during 2020, but in the ‘W-shaped’ recovery, it now expects volumes to fall by 19% to 6.4 million in the year.

In Q1 of 2020, figures from the Society of Motor Manufacturers and Traders (SMMT) show the UK used car market fell 8.3% to 1.8 million transactions.

Northard’s view of RV performance mirrors that of the valuation guides. “We expect the values to be volatile in the short term due to a variance of those experiencing cashflow challenges and those holding strong in the market,” he said.

However, he expects this to “wash through” as volumes and demand align, and restrictions begin to be lifted.

Alex Wright, managing director of Shoreham Vehicle Auctions (SVA), also expects the used market to bounce back. “I believe the post lockdown market will see prices stabilise after a month or two and then go through the roof supported by strong demand, particularly in the £6,000-£12,000 price band,” he said.

Leasing companies are taking a similar view, while stressing any predictions are fraught with danger in such unprecedented times.

With so many unknown variables, Jon Lawes, managing director of Hitachi Capital Vehicle Solutions, said: “There will remain an element of demand as there will be a lower supply of used product in the market, so we’re expecting a quicker recovery than some market forecasts."

However, Lawes argues that, if values are to be achieved in a post-pandemic used car market, leasing companies will have to 'work harder'.

“It’s important for leasing companies and sellers to prepare stock really well and to find the right buyers in the right location and to work harder to achieve the realisable value of the vehicles,” he said.

Nick Hardy, sales and marketing director at Ogilvie Fleet, added: “The fact is we just don’t know yet how strong that used car market may or may not be.” 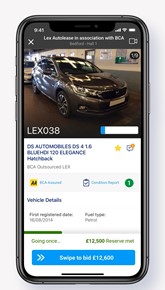