The number of new company cars registered to fleet and business was up 28.3% last month, compared to March 2020, according to new data from the Society of Motor Manufacturers and Traders (SMMT).

There were 157,114 new cars registered to fleet and business in March, an increase of 34,686 vehicles on the same month last year.

Overall, there were 283,964 new car registrations, including private sales, an 11.5% increase on the 254,684 vehicles registered in March 2020. Fleet and business registrations accounted for 55.3% market share in the month.

However, year-to date figures from the SMMT show that fleet and business new car registrations are still 6.4% down on where they were after the first three months of 2020.

So far, 239,349 new company cars have been registered to fleet and business, compared to the 255,567 vehicles registered in the first quarter of 2020.

Looking at overall new car sales, the SMMT says that 2021 has seen 58,032 fewer cars registered compared to January to March last year, equivalent to a loss of £1.8 billion in turnover during the first quarter.

“In the 12 months to March 2017, there were 2.7m new car registrations, compared to just 1.5m registered over the last year,” Ashley Barnett, Lex Autolease

For the sector to return to its pre-pandemic levels, around 8,300 new cars will need to be registered every single trading day for the rest of the year.

By comparison, the industry has averaged around 7,400 a day during the past decade and current levels are closer to 5,600 a day.

Fleet registrations are currently driving the new car market, while retail consumer demand remains depressed, falling by 4.1% compared to March 2020 as showrooms remained closed for the duration of the month.

The shift to new technologies is continuing, however, with plug-in vehicle demand reaching its highest ever volume.

Battery electric vehicles (BEVs) and plug-in hybrid vehicles (PHEVs) took a combined market share of 13.9%, up from 7.3% last year as the number of models available to customers increased from 72 to 116.

Mike Hawes, SMMT’s chief executive, said: “The past year has been the toughest in modern history and the automotive sector has, like many others, been hit hard. However, with showrooms opening in less than a week, there is optimism that consumer confidence – and hence the market – will return.

“We know we will see record breaking growth next month given April 2020 was a washout, but a strong and sustainable market is possible if customers are attracted to the choice and competitive offer the industry is able to provide within the safest of showroom environments.”

Hawes says that new plug-in models are already helping drive a recovery, but to convince more retail consumers to make the switch, they must be convinced these electric vehicles (EVs) will be fit for purpose, which will rely on a comprehensive charging infrastructure.

Ashley Barnett, head of consultancy at Lex Autolease, told Fleet News that today’s figures point to a concerning drop in the rate at which newer and cleaner cars are joining the UK’s roads, based on a typical four-year replacement cycle.

“In the 12 months to March 2017, there were 2.7m new car registrations, compared to just 1.5m registered over the last year,” he said. “This shortfall highlights that more than one million cars on today’s roads are older and less efficient, posing a potential roadblock in the ongoing work to achieve net-zero.

“Despite this, the growth in EVs continues to show no signs of slowing down, with registrations up 88% compared to this time last year.

“While the progress is reassuring, it should be noted that EV adoption levels are still in their infancy when compared to the whole of market and there is a need for continued fiscal support to encourage widespread uptake.”

Barnett says that the Government’s recent decision to cut the plug-in car grant caught the industry by surprise. “While entry level models from many manufacturers will continue to qualify for a subsidy, more expensive vehicles – which are likely to have a bigger battery and longer range – are no longer eligible,” he added. “We’ll no doubt see the impact of this unfold over the coming months.

“Government departments and industry bodies need to work together to maximise the opportunities to encourage EV uptake and reassure manufacturers that the UK is leading the EV charge. Now is the time for sustained investment as we accelerate along the road to zero.”

Jon Lawes, managing director of Hitachi Capital Vehicle Solutions (HCVS), says that the latest figures highlighted how the industry has adapted to deliver in a Covid-safe environment enabling it to deliver growth.

“We’ve seen this first-hand, with 2020 being a record year for HCVS,” explained Lawes. “Our leasing fleet grew by more than 19% on the previous year against a backdrop of a declining vehicle leasing market.

“At the same time our customer feedback scores beat the previous 12 months, highlighting the importance of putting customer experience and safety first during these challenging times.

“I strongly believe that overall the industry is in a good position to meet the pent-up consumer demand in the months ahead by focusing on innovative customer service and delivery.” 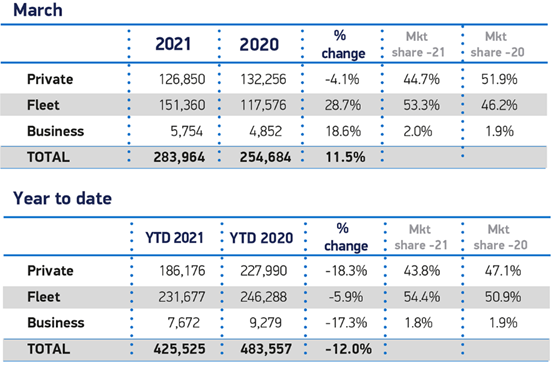 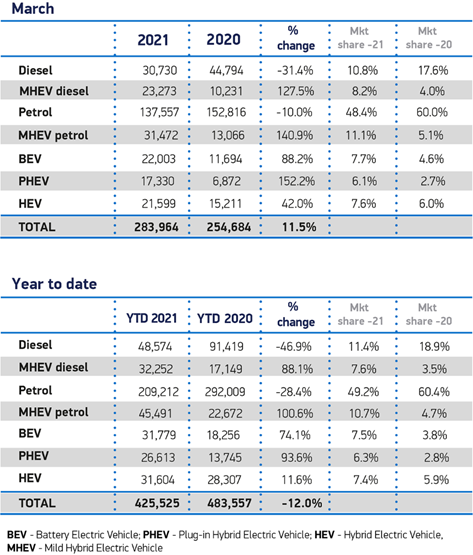 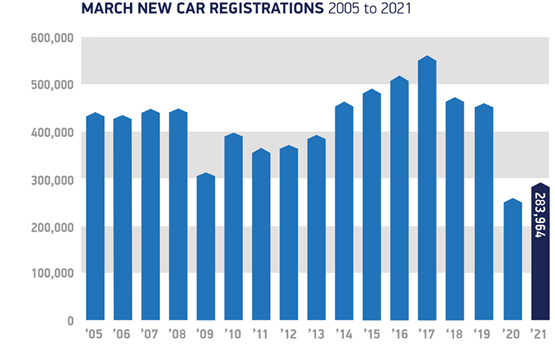 SUVs account for almost half of new car registrations

SUVs accounted for 44% of all new cars sold in Europe in January, an all-time record, according to Jato Dynamics.

Fleet and business new car registrations down by a third

Fleet and business new car registrations were down by more than a third in February as lockdown continues to depress demand, figures from the SMMT suggest.