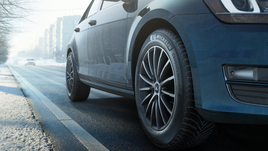 Michelin has launched its all-season tyre, the new Michelin CrossClimate 2.

Scott Clark, executive vice-president, automotive, motorsport and member of the Michelin Group executive committee, said: “Since its launch, the original Michelin CrossClimate has had a radical effect on the European all-season tyre market, which has since enjoyed annual growth more than 19%, in addition to being the only segment to have kept growing during lockdown.

“Over the next five years, it is expected to expand at a rate of more than 16% per year. Safer, longer-lasting and more economical, the Michelin CrossClimate 2 is a further illustration of the Group’s All-Sustainable strategy.”

The 3PMSF (3-Peak-Mountain with Snow Flake) logo on the tyres sidewalls confirms that it can be used in winter in countries where winter tyres are mandatory.

Michelin said this means that for drivers who take their vehicles to mainland Europe during the winter months, there will be no need to swap onto winter tyres, and back again, each year.

The CrossClimate2 is available in 105 sizes – a 40% increase compared to its processor – for vehicles with 15- to 20-inches wheels.

Michelin said its technologies ensures high performance through the whole life of a tyre, down to its tread depth marker and its low rolling resistance helps save on fuel, energy and materials.

Michelin said its CrossClimate 2 – both new and worn – came out on top in six out of nine tests (chiefly braking and traction performance tests) in 2020 and 2021.

Michelin to connect all its car tyres by 2023

Michelin has announced it will incorporate Radio Frequency Identification (RFID) chips into all its car tyres by 2023.

Goodyear will continue its 25-year partnership with the UK police after winning a new contract to continue to supply tyres to the entire force for the next four years.