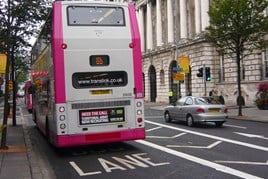 Harrow Council fined almost 8,000 motorists in less than two years for driving into a 39ft bus lane in London.

The bus lane – not much longer than the length of a double-decker – is situated on a section of Northolt Road in South Harrow, RAC reports.

Data has revealed that 7,854 drivers were caught using the north-west London route illegally between April 2019 and the end of 2021, pocketing the council a total of £442,363.

The scale of the number of fines issued came to light after motorist Geoffrey Ben-Nathan, submitted a Freedom of Information (FOI) request to Harrow Council.

He successfully overturned the fine he received after accidentally driving into the bus lane.

The local authority said it was against the law for motorists to use the lane, but the way the road is laid out and signposted has led some people, including Ben-Nathan, to believe they have been treated unfairly.

The retired businessman argued his case at a tribunal, telling adjudicators that the signage on the approach to the lane is ‘unclear’ and will lead to many other people getting fined.

The tribunal heard that most restrictions along Northolt Road only apply at certain times of the day. But this becomes a 24/7 restriction for the small section of the route at the junction with Alexandra Avenue.

Ben-Nathan, of Northwick Park, said the FOI figures show that most drivers who are caught will “simply pay up”.

RAC head of roads policy Nicholas Lyes said: “Signage and road layout are crucially important when it comes to enforcing any bus lane, and anywhere a local authority is dishing out a high volume of penalty charge notices for a single location should sound alarm bells about the design of the scheme.”

In its response, Harrow Council said it believes that “the signage here is clear and in accordance with the law”.