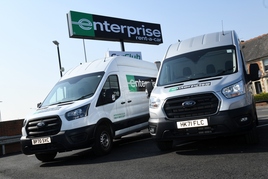 Enterprise has invested more than £1.1m in relocating and upgrading two branches in Reading - the town where the company first opened for business in the UK in 1994.

Enterprise says the upgrades will create six new jobs and more than treble its vehicle capacity in the town.

The new premises will also enable the company to increase its car club offering, which provides 24/7 on-demand vehicles.

The investment enhances two of the company’s three locations in the town. It includes the new flagship branch on the Basingstoke Road, which replaces Enterprise’s first branch which was on Boulton Road, and a new outlet to the West of the city on Cow Lane.

Enterprise also has a store at the Q-Park in Chatham Place that serves the city centre and the railway station.

Jeven Wright, who joined Enterprise as an intern four years ago, was promoted to branch manager at Basingstoke Road following the relocation. He said: “This is my first branch manager position, and I am really excited at the prospect of growing the team and our customer base.

“We’re now closer to all the businesses in this part of town and we have much more space for vehicles and customers, whether they need transport for a business trip or for the weekend.

“We have already added many vehicles, including electric plug-in hybrids, and we are expecting further expansion in our fleet over the summer.”

Enterprise opened its first UK branch in Reading in 1994, the first outside of North America.

Adam Lovelock, vice president of operations for Enterprise in the Southeast, said: “This major development in Reading, where we opened our first UK branch, is part of a multimillion-pound investment that has continued throughout Covid.

“Our aim is to build a branch network for the future that supports local people and businesses and helps communities to reduce emissions and congestion and improve air quality by giving people access to modern low emission vehicles.”

Since 1994, Enterprise has expanded to more than 450 locations across the whole of the UK and employs more than 5,000 people.

Businesses are adding car clubs to travel policies in response to growing demand for business travel as employees return to work, according to Enterprise.

Siemens UK has launched a new mobility scheme to provide on-demand vehicle hire to all its employees.