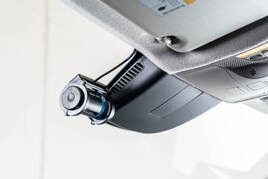 Geotab and Surecam have partnered to provide fleet operators with new video and telematics capabilities.

The latest version of the SureCam solution features a new method for capturing video footage from SureCam cameras using Geotab’s telematics device and rule-based system, resulting in a display of video within the MyGeotab platform.

The upgrade is available to new and existing users on the Geotab Marketplace.

David Savage, vice president, UK & Ireland at Geotab, said: “We have a long and established working relationship with SureCam and are delighted to work with them on the next phase of their integrated dash cam technology.

“Not only are cameras a vital safety tool that can help accurately record and prevent accidents, but they also have the added benefit of helping with insurance claims and reducing wear and tear on vehicles. The enhanced features from SureCam takes the camera technology to the ‘next-level’ of in-cab functionality.”

It also uses G-force triggered alerts that detect unsafe driving behaviours, such as harsh driving, and automatically captures video footage which can be later reviewed on the MyGeotab platform and can alert managers to incidents, when necessary.

Geotab said this allows fleet operators to further investigate call-ins and other minor incidents that may not have been triggered by an event-based rule.

Additionally, the ‘SureCam LiveCheck’ feature allows fleet operators to tap into a live video feed from their dash cameras. SureCam uploads video over a cellular network.

The EV Café has announced a nationwide search with Geotab, for a fleet that is committed to making the transition to electric vehicle (EV) technology.

Max Hillman, president of SureCam, said: “Our primary objective was bringing SureCam’s ease of use directly into the MyGeotab platform. Each Geotab customer can leverage video in the ways that make sense for their business, in line with how they’re already using Geotab to manage safety, efficiency and profitability.

“The update to the SureCam solution is entirely centred around Geotab customers and how they leverage Geotab technology to manage their fleets."

The upgraded integration is due to be available from this month to existing and new Geotab users and available as part of the Geotab Marketplace.

The EV Café has announced a nationwide search with Geotab, for a fleet that is committed to making the transition to electric vehicle (EV) technology.

Stellantis is aiming to take the driver-vehicle relationship to the next level after signing a deal with Qualcomm to use its Snapdragon Digital Chassis solution.