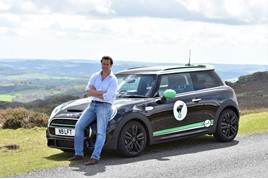 Lightfoot has unveiled The Drivers’ Lottery. The cash-prize competition will reward safe drivers who are also efficient, and follow ‘green’ fleet driving.

The scheme has been released nationwide and gives a variety of fleet drivers a one-in-seven chance of winning cash sums from £2 to £100 each week.

Once a driver has achieved Lightfoot’s ‘elite driver’ standard they are able to opt in. Drivers are rewarded with this status after cutting fuel use and emissions by up to 20%, and the risk of accidents by up to 40%.

“Based on over a billion miles of driving data, we know that Lightfoot has been proven to be the fastest and most effective way of changing driving styles in fleets and has a greater impact than buying a brand-new hybrid or electric vehicle.

“The country has to wake up to the fact that the quickest and most effective way to reduce vehicle emissions is to drive better, not to scrap a diesel and buy a hybrid.

“Over the past four years, we have conclusively demonstrated that Lightfoot’s drivers reduce vehicle emissions and fuel costs by up to 20%.

“With our technology in place, that’s the equivalent of taking one in five fleet vehicles off the road without reducing fleet capacity. This is big!”

Lightfoot users have seen reductions in fuel costs by up to 20%, falls in harmful emissions by 20%, drops in accidents by up to 40%, and cuts in wear and tear costs by 45%.

At the moment, Lightfoot is the only technology that feeds into The Drivers’ Lottery but there are plans to involve other technologies, taking data directly from connected vehicles.

Drivers achieving the elite driver standard are not only able to win cash prizes, but also gadgets, vouchers and experiences days.

Lightfoot hope bringing cash prizes in to play will only look to increase safe, efficient driving.